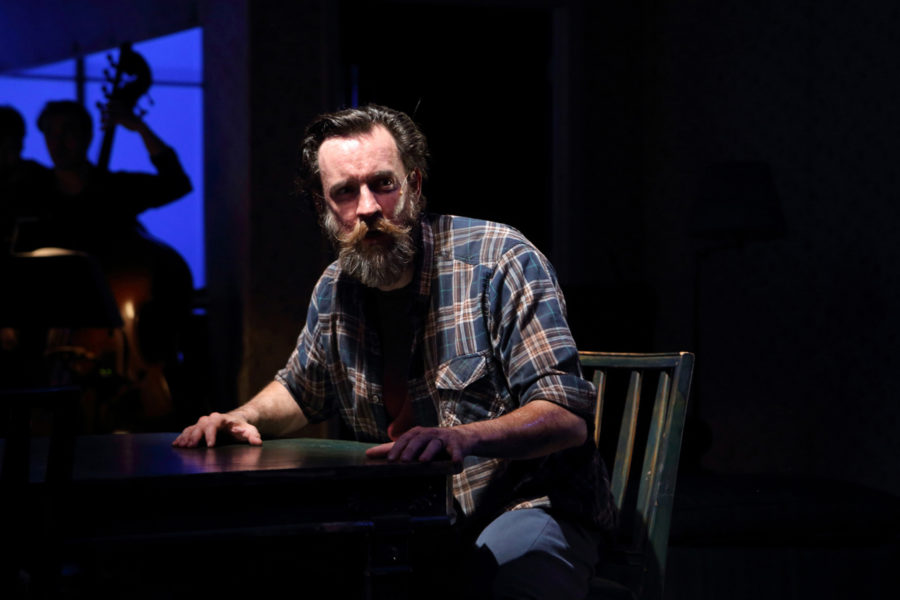 James Bobick as his character Howard in "Dog Days."

Emmy Award winner James Bobick, baritone, plays the father, Howard, in the original cast for the opera “Dog Days,” which is set to release its record this month.
He is also the instructor of voice, opera and diction for singers at Mercyhurst University.
“Dog Days” is about a Post-Apocalyptic family that sees their world crumbling throughout the show.
Originally a short story by Judy Budnitz, composer David T. Little and librettist Royce Vavrek used it as inspiration for the opera.
The show begins with a man dressed up as a dog who shows up at the family’s house and befriends the daughter.
Dressing and acting like a dog seems to be the man’s coping mechanism for the way the world currently is.
Bobick’s character is angry with this man for not dealing with the situation in a more “manly” way and presents that through his aria “Stand Up Like a Man.”
Throughout the opera, it is evident that the world is gradually getting worse as it is a martial state and by the last act, named winter, they are starving.
Robert Woodruff was the director for all of the productions.
“He really challenged me to go to places that I never thought I could go,” Bobick said about Woodruff.
Bobick loves all of his cast members and genuinely considered them a family.
“We took on the roles of our characters over the years and to be this broken man with the people I cared about was an incredible experience and I give it all to Robert,” Bobick said.
The first rehearsal was about five weeks long, which allowed them to learn more about their characters.
“During the rehearsal process for the very first production, we had a doctor come in and talk to us about what physically would happen to you when you were starving,” Bobick said.
The role was essentially written for Bobick after he was asked to audition. After three auditions, they saw that he was able to fulfill this role, so it was set to his vocal range.
One of the things that he loves most about the opera and production is the music.
It was composed by a rock drummer and the music is a combination of classical operatic writing set to a non traditional orchestra.
“The music gives an otherworldly, broken essence as a backdrop to a story that is so real,” Bobick said.
“It is incredibly difficult, and in a weird way, allows me to take this broken journey with this man and his family. I also have a wife and two young daughters and I really feel his pain and it is amazing to be able to have the opportunity to tell this story and ride this emotional journey through opera,” Bobick said.
The recording process for this opera was done live over five production nights when the cast performed at L.A. Opera. This is because they did not want to record it in a studio.
“It was difficult because I broke a rib towards the end of the performance on the third night. Let’s just say that the next two shows were painful,” Bobick said.
All of the shows in L.A. were sold out during that run. It was well-received for all of the performances except in Texas due to its content.
The record was released digitally on iTunes on Sept. 9; however, the record release party will have the first physical copies available. I will be on Oct. 16 in Brooklyn at a new venue called National Sawdust. The cast will be performing excerpts that night and will be accompanied by pianist James Johnston.
As a disclaimer, the opera is not for the faint of heart and can be very dark. There is a lot of profanity as well.
“It is a very adult show in the best possible way, not in a gratuitous way, but there is a reason that everything happens,” Bobick explained.