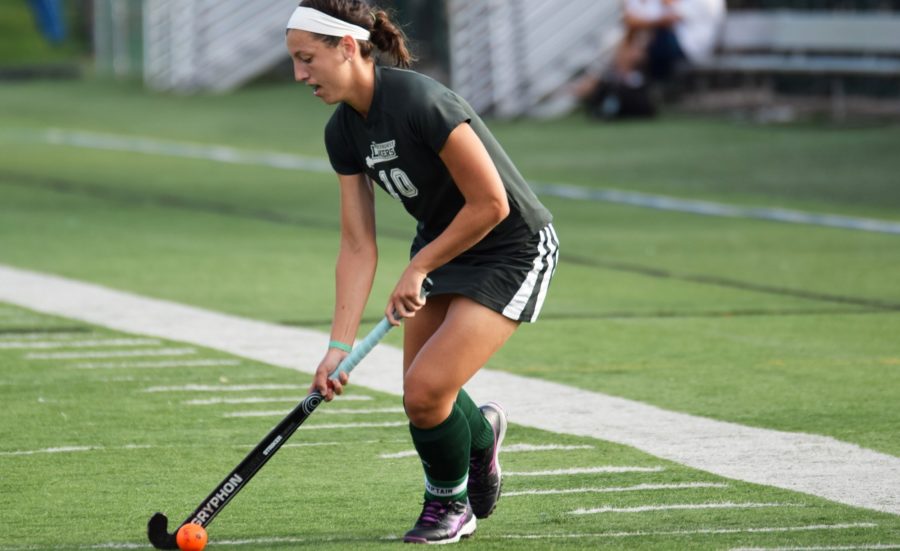 The Lakers fall to Kutztown 4-0, losing their eigth game this season. Alex Albright made her 11th appearance

The Mercyhurst Lakers field hockey team was unable to best the Kutztown University Golden Bears in their second contest against each other this season. This continues what has so far been a winless season for the Lakers, who have lost all eight games of the year so far.
The final score of the Sept. 28 game was 0-4, Golden Bears, who are currently ranked No. 8 in the PSAC. The game was held at Kutztown University.
The Golden Bears got off 24 shots compared to the Lakers’ three; 14 of them also being on goal. The Lakers’ shots were each attributed to Taylor Balser, Alexis Skibitsky, and Katie Lechner. On the goaltending side, Mercyhurst’s Sam Takac was able to contribute 10 saves against the Golden Bears.
Senior Midfielder Emily Burns was able to comment on the loss. “It was really frustrating because we played Kutztown earlier in the season and we went into overtime… it was a way more competitive game than the game we played,” Burns said. “We are learning to work with our system better… What we really just need is better team chemistry on the field.”
The score of that earlier game, played Sept. 14 at Tullio Field, resulted in a 3-2 loss to the Golden Bears.
“I think they played well but I think we can totally match them. They’re a talented team, but so are we” Burns stated when referring to the Golden Bears’ performance.
The Lakers’ next game was on Saturday Oct. 1, which was Senior Day against the East Stroudsburg University Warriors.
The Warriors are currently ranked No. 2 in PSAC for Field Hockey, deafeated the lakers 5-0. The previous contest against the Warriors ended 7-0, Warriors.
Mercyhurst field hockey’s next game will be on Oct. 8 agaisnt Mansfield University at Mansfield.