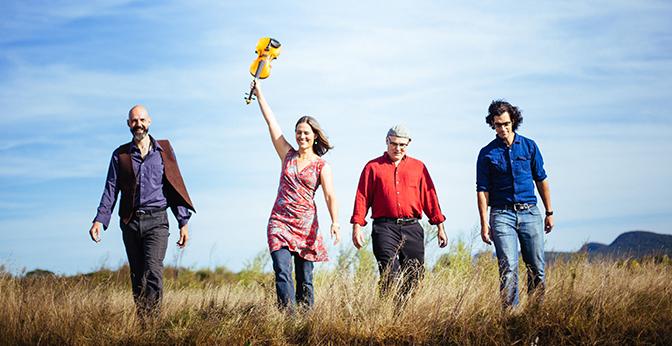 On Friday, Mercyhurst Institute for Arts and Culture will host “American Spiritual” presented by Rani Arbo and daisy mayhem.
The performance is at 7:30 p.m. in Walker Recital Hall. Tickets are $15 for adults, $12.50 for seniors,$10 for students and youth. Tickets are free for Mercyhurst students who present their student ID at the box office.
The quartet consists of members Rani Arbo, Andrew Kinsey, Anand Nayak and Scott Kessel.
The band has been together for 15 years and is based out of the New England area.
Arbo is originally from New York City and went to college for geology, where she fell in love with the fiddle and Cajun, honkytonk and bluegrass music.
Kessel has been drumming since he was in preschool, and now is known for mixing American rock and pop beats with African, Afro-Cuban, New Orleans and South American rhythms.
His signature recycled drum set is made of cardboard and wooden boxes, cat food tins, a Danish butter cookie tin and a vinyl suitcase.
Nayak did not start playing guitar until he was 15. From then on, he was trying to play anything he could.
He is a Grammy-nominated producer, performer and writer, with numerous other awards in family music. Kinsey started his career as a bagpiper and picked up the guitar in college, and eventually the banjo and ukulele as well.
When not on tour, the band members live with their families and have other occupations from house builder, to muralist and making more music.
“American Spiritual” is one of two programs that the band performs regularly.
This show is a bona fide revival that draws on 200 years of roots music that is uplifting and connects with the audience.
The audience will hear anything from prison work songs, blues, gospel and original compositions.
With their infectious camaraderie, Rani Arbo and daisy mayhem draw in the audience to join in with the performance.
You can even get a preview of some of the band’s songs on its website www.raniarbo.com.
Tickets for the show can be purchased at miac.mercyhurst.edu or by calling the box office at 814-824-3000.