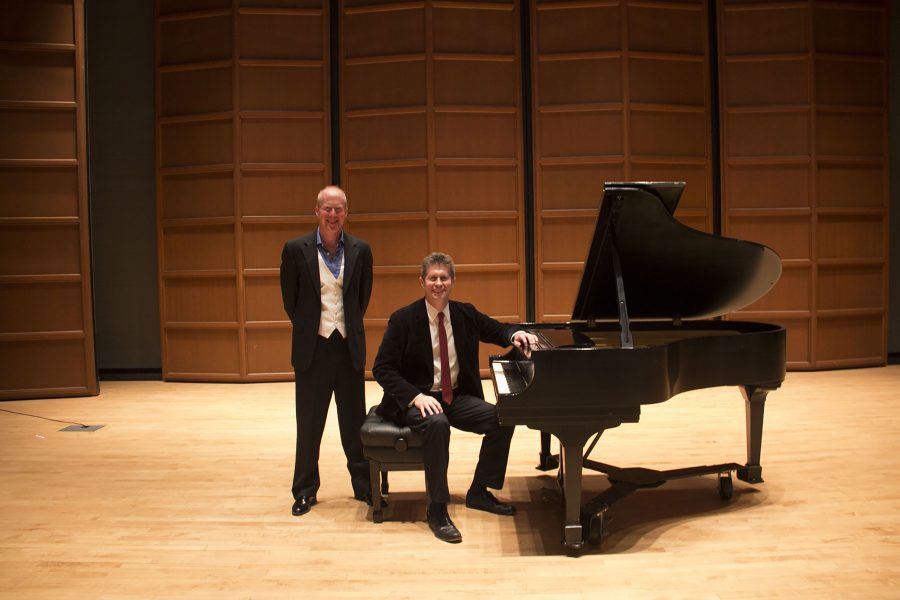 On the left is Ken Johnston, the featured violinist, and on the right is Nathan Hess, D.M.A.

On Oct. 10, violinist Ken Johnston took the stage at Hirt Auditorium in the Blasco Library, whereupon he flawlessly executed a technically challenging and melodically satisfying program of works for solo violin and violin and piano.
Johnston is the well-known and highly skilled concertmaster of the Erie Philharmonic.
He was accompanied on the piano by our very own Nathan Hess, D.M.A., who is currently the chairman of the D’Angelo School, as well as professor of piano.
The concert opened with “Suite in the Old Style” by Alfred Schnittke.
This piece is a unique Schnittke piece as it is very tonal and romantic.
The first movement, “Pastorale,” began with a piano introduction and utilized a charming, simple and folklike melody.
One listening to the movement could imagine a young couple walking through a verdant pasture, hand in hand, past grazing sheep and a babbling brook.
The second movement, “Ballet,” was lively, bright and contrapuntal.
It utilized an angular and highly rhythmic motive.
Consistent with the movement’s name, one could imagine a courtly dance by noblemen and women.
The third movement, “Minuet,” which was in the key of A minor, was sentimental and reflective.
A listener could imagine an elderly man watching the leaves fall in autumn, while he reflects on his life that was full of loss and challenges.
The fourth movement, “Fugue,” utilized the piano more as a duet than accompaniment, playing an equally important role to the violin.
The movement was somewhat playful, dramatic and was also highly contrapuntal, a normal characteristic of fugue.
The final movement, “Pantomime,” which was lighthearted, expressed innocence along with subtle humor throughout the piece.
In the middle of the movement, the interval of a minor 2nd was sustained by the violin, which also added extra musical humor to the movement.
One could imagine a traveling street performer entertaining a crowd of people on a Sunday afternoon.
The second piece on the program was “Fuga” from the “C Major Sonata no. 3 for solo violin, BWV 1005,” by J.S. Bach.
The fugue had two and sometimes three distinct voices and utilized double, triple and quadruple stops throughout the entire piece.
Although this is very technically demanding for a solo violinist to play, it was played with great accuracy and precise articulation by Johnston.
Before the performance of the piece, Johnston joked that as long as he is able to perform this piece, he will consider himself to be proficient in playing the violin.
It was clear from the applause that the audience had been delighted by his spectacular performance.
The final piece was the “Violin Sonata no. 3 in D minor, op. 108” by Johannes Brahms.
The first movement, “Allegro,” was in the traditional sonata allegro form, which consists of three sections.
This was very effective and created extra tension and a sense of growth during the development section.
The second movement, “Adagio,” was very romantic and sentimental.
As the beautiful and wide–ranged melody sang and grew, double-stops were added to create very lush harmonies during the melodic high points.
Then, at the end, the energy slowly faded away, and the movement ended softly.
The third movement, “Un poco presto e con sentiment” was an intense, but playful movement that was beautifully written and which highlighted the intimate relationship between the piano and the violin.
While the piano was mainly accompanying the violin, it also was having musical conversations back and forth with the violin.
Finally, the fourth movement, “Presto agitato,” was a very virtuosic and heroic movement, and grew in intensity that culminated in the final statement of its theme.
At the end of the concert, Johnston and Hess played an encore.
They performed the piece “Balletto,” which originated from the soundtrack of an Italian film called “Il Gattopardo,” which translates to “The Leopard.”
The piece was composed by Nino Rota, and transcribed for violin and piano by Paolo Zannini.
The piece was short, charming and had a folklike quality.
The primary motive sounded like a happy folk dance, and the melody was tossed back and forth between the violin and piano.
This cute motive was contrasted by a more legato, romantic and lush variant of the theme.
The simplicity and lighthearted nature of the piece was the perfect way to end the evening.
Overall, I thought that Johnston and Hess made a fantastic duo.
Each played with incredible stylistic accuracy, highly intuitive and genuine senses of musicality and displayed brilliant musical communication between one another.
The balance and blend between the two collaborators was impeccable and the repertoire was a delightful and well–balanced mixture of musical periods.
From a compositional standpoint, out of all the pieces performed, my favorite was the “Suite in the Old Style.”
I particularly enjoyed how Schnittke was able to compose a piece in an older style but with a modern set of tools and a unique approach that brought it into the 20th century.
From a performance perspective, it is impossible to choose which work was my favorite.
I thought the whole concert was wonderfully prepared and presented, and it is my sincerest hope that there will be more Johnston-Hess recitals in the future.