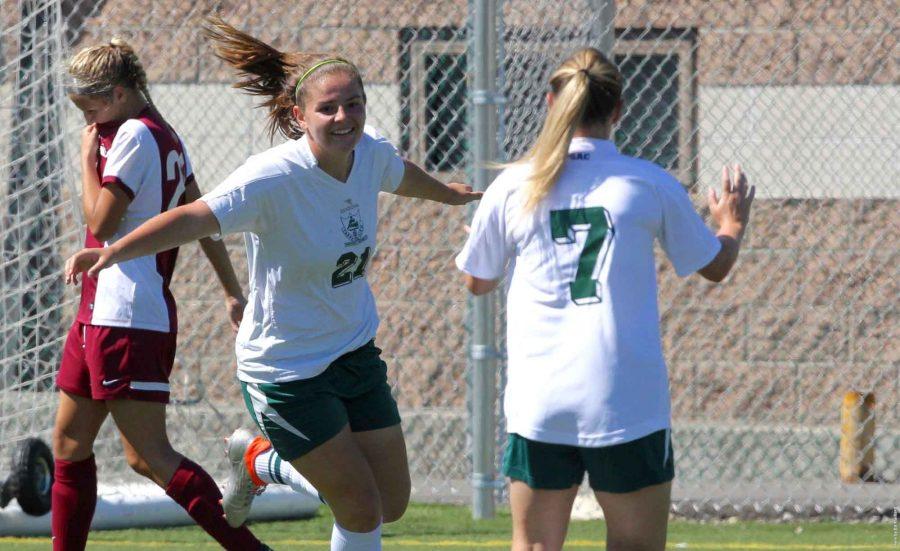 Freshman Jinan Abdalah Funes scored her sixth goal of the season at the 17th minute against Mansfield University on Oct. 16.

On Oct. 16, women’s soccer defeated Mansfield Mountaineers 2-0, ending a three-game losing streak at home. The Lakers earned their sixth win in the PSAC conference, leaving their conference record 6-6-1.
Mercyhurst’s first goal was scored on the 17th minute, by freshman Jinan Abdalah Funes, a Honduran forward. The goal came from a corner kick made by senior Rebekah Craig, whose cross arrived to the box where Abdalah Funes was. She sent the ball into the goal with a header, scoring her sixth goal of the season.
“In that moment I was relieved since the objective was to score before halftime,” Abdalah Funes said. “Honestly, Rebekah Craig made a really good cross, which left the keeper in a bad position. I headed the ball and it went in.”
With 13 games played, 2.15 shots per game and 0.46 goals per game, Abdalah Funes is currently one of the most influential player on the team, despite being a freshman. “At first I struggled a lot, but with time and dedication, I proved myself and showed what I am capable of bringing to the team,” she said.
Freshman Paz Aguirre Estalella, manager of the team, also had something to say about Abdalah Funes. “She is playing really well. She is definitely an important player for us. We have great players in the team, and they’re all important for us but Abdalah Funes is one of the best,” she said.
Mercyhurst’s second goal happened one minute after the first one. Maya Bauer got possession of the ball on the midfield and took it to the box, where she passed it to Maia Russo, who was on the right side. Russo shot to the lower-left corner and scored her second goal of the season.
On the second half, the Lakers continued with the possession, trying to score even more goals. Moreover, Mercyhurst’s defense allowed only one shot at goal in the entire second half.
Aguirre Estalella, being the manager for the Lakers this season, described the team’s chemistry as optimal. She says they all get along and that there is a family feeling going all the time. According to her, the Lakers need only three wins out the four upcoming games to go to the playoffs. She also claimed that they are feeling optimistic about it.
The next game for the Lakers is on Saturday at 1 p.m. against Kutztown University. This game will be held at Mercyhurst.