It’s up to you to solve the mystery 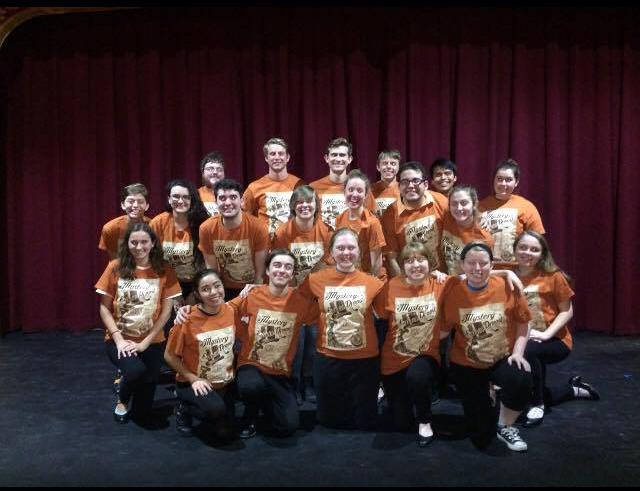 The cast of the musical “The Mystery of Edwin Drood.”

It’s that time of year again–time for the Mercyhurst Theatre Program to dazzle us once again with one of their brilliant musical performances.
This year’s production is more unique than ever; “The Mystery of Edwin Drood,” a Tony-award winning musical, is not an ordinary show.
It is a solve-it-yourself musical that emphasizes, even relies, on audience participation, because it is the audience that chooses the ending.
“The Mystery of Edwin Drood” takes place in the era of a Victorian music hall, yet breaks down the fourth wall by featuring a rowdy group of actors who mount a staging of Charles Dickens’ unfinished novel.
Each person on the stage is a possible suspect in the disappearance of the young Edwin Drood, and it is up to the members of the audience to choose the killer.
The quirkiness of this production comes from the postmodern twist on an unfinished Charles Dickens tale and the fact that each performance ends quite differently, depending on what the audience decides.
Brett D. Johnson, Ph.D., director of the upcoming production and the Mercyhurst Theatre Program, says, “The pleasure of pointing an accusatory finger at the culprit is only one of the many delights of the show.
You have the giddiness of the framing device – that of a veteran troupe of music hall players bickering, leering and scavenging for laughs as they perform a stage version of Dickens’ tale – and Rupert Holmes’s timeless pastiche of a score, including the soaring ballad ‘Moonfall,’ the patter song ‘Both Sides of the Coin,’ and the operatic ensemble number ‘No Good Can Come From Bad.’”
After its initial Broadway premiere in 1985, “The Mystery of Edwin Drood” won five Tony Awards and became the very first Broadway musical to have multiple endings determined by the audience.
Don’t miss your chance to play a role in this quirky and fantastic show.
Performances are Nov. 3 to 5, at 7:30 p.m., and Nov. 5 to 6, at 2 p.m. in Taylor Little Theatre on the Mercyhurst campus.
Single tickets are $15 for adults; $10 for senior citizens and students, and $5 for youths and Mercyhurst students with ID.
All performances are general admission, with doors opening 30 minutes prior to curtain.
Reserve your tickets today at miac.mercyhurst.edu or 814-824-3000.
Tickets will also be on sale at the theatre beginning one hour before curtain. Cash only. For more information, visit miac.mercyhurst.edu.