Rugby Club teams up with Gannon 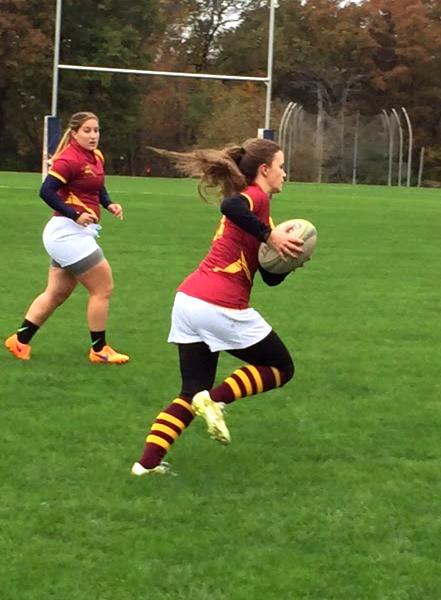 The Mercyhurst Rugby Club is now playing league rugby games alongside our traditional rival, Gannon University.
“We began with pick-up rugby games that were co-ed and just Mercyhurst students.
“This year we reached out to Gannon Rugby Club who was looking for players for their fall season. We were able to combine with Gannon to play club league games,” Kelly Peters, Mercyhurst Rugby Club president, said.
Mercyhurst’s club team overall has very little experience in the sport.
“Some of the Mercyhurst girls who play with the Gannon team had no rugby experience before this August and have been very successful picking up the sport so quickly. I am so proud of them. Really anyone can play. We are always looking for more people to share the sport with. You really don’t need any experience, just a willingness to learn,” Peters said.
So far the Mercyhurst girls have played in two games with two more scheduled before Thanksgiving break.
“Being new to rugby, I wasn’t sure what to expect at first but I absolutely love it. The teamwork, athleticism, tackling and adrenaline have given me a strong passion for the game. Nothing better than tackling people in the mud,” Hannah Mayes, Mercyhurst junior, said.
Mercyhurst hopes to grow the team so that it can have an official team for the school and play in the league.
“We are extremely grateful that Gannon allowed us to combine with them, but our main goal is to have an established team at Mercyhurst for league games,” Peters said.
In the spring of 2015, Mercyhurst University officially recognized the club.
“Myself and a few other students who shared an interest in the sport wanted to establish a team because we didn’t have one yet. We (Mercyhurst) have Irish roots. We needed a team,” Peters said.
Peters played for three years in high school and led her team to two state championship tournaments.
“The sport makes me feel really strong. The women play by the same rules as the men. It’s full contact. The women’s rules aren’t played down,” Peters said.
In rugby, unlike other sports, the rules are exactly the same for the men’s and women’s teams.
“It’s actually really nice to scrimmage and play pick-up games with the guys because they really help you learn,” Peters said.
This spring, the Mercyhurst men will be combining with Gannon as well to play league games.
“It is really one of my passions and I really wanted to be able to share my love with as many people as are interested,” Peters said.