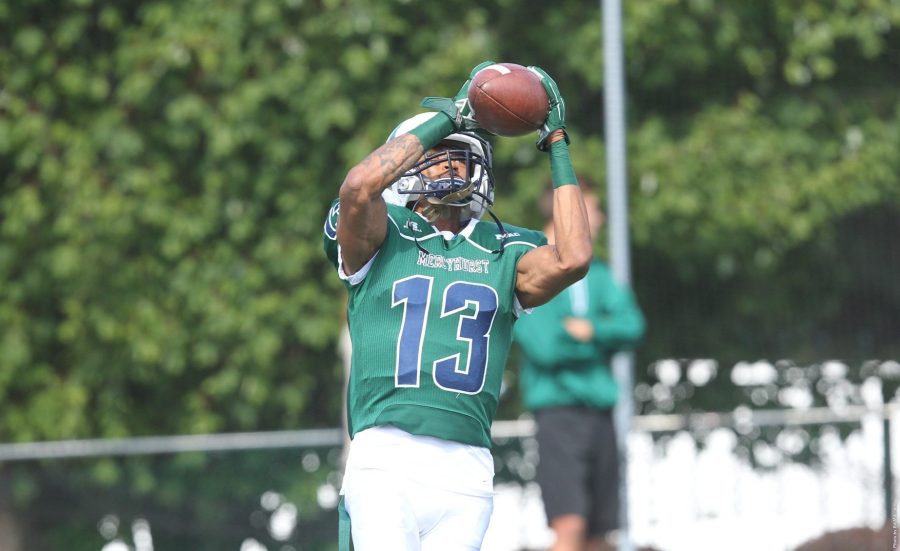 Wide receiver Danavian Clay had two touchdown interceptions throughout the game. The junior was an important asset for the Lakers with 10 catches for 114 yards.

The Mercyhurst football team squared off against the Seton Hill University Griffins in Greensburg Oct. 22, as a part of the latter’s Homecoming celebration.
Despite being able to chip off a significant chunk of a huge deficit in the second half, the Lakers ultimately were unable to overcome the Griffins, who made a stand after running over the Lakers in the first half.
The Griffins ended the first quarter up 14-0. Khalil Howard, scorer of the second Griffin touchdown, would end the game with a single game record of four touchdowns. Griffin quarterback Christian Strong also had a big day, going 28-46 for 458 yards and four touchdowns.
The second quarter only saw the Griffins build their lead, with the score at the end of the half being 34-7. The lone Laker touchdown of the quarter came at the 10:51 mark, with Mercyhurst quarterback throwing a 2-yard pass to receiver Brad Novak.
Entering the second half, the Lakers faced quite an uphill battle. After a field goal by kicker Dylan Kondis, the Griffins responded with another touchdown to make the score 41-10. It was after this however, that the Lakers started chipping away, with a run by Doug Altavilla and a pass on the next drive to tight end Bryce Mostoller that made the score 41-25 (Mostoller also caught a pass for the extra point play). The Griffins would score again, but the Lakers were also able to put up another touchdown at the 1:04 mark to make the score 48-32 with a catch by wide receiver Danavian Clay
While the Griffins scored early in the fourth to make the score 55-32, it would be their last of the game. Running back Richie Sanders took it all the way for a 66-yard touchdown return, but Kondis missed the extra point. At this time, there was still 5:11 left, but the Lakers were still down by 17 points. The Lakers were unable to score again until the 0:58 mark, when Altavilla threw a 7-yard pass to Clay to make the score 45-55, Griffins.
Altavilla threw for 406 yards and was 27-57 passing and had four touchdowns and three interceptions. Sanders ran for an all-purpose total of 351 yards and had a touchdown, Clay had 114 yards and two TDs, wide receiver Clay Waldron had 94 yards and receiver Brian Matthews also recorded 74 yards to lead the offensive stats. Novak also had 54 yards and a touchdown, and Mostoller added one to the total.
On the defensive side, the Lakers saw six tackles each by D-backs Tarique Ellis and Rocky Owens, linebacker Kazimer Struna and defensive lineman Ryan Carroll. Defensive back Akeel Marsh led the squad with seven total tackles. A fumble was forced by defensive back Dorian Stevens as well, and defensive lineman Theophilus Blackston III recorded the lone Laker sack of the day.
Altavilla, when asked about the end result had this to say.:“We left a lot of opportunities out there, especially in the first half, only scoring seven points. That’s not something we like to do as an offense,” say Altavilla. The Lakers went four and out four separate times in the game, and were only three of 17 on third down. “Our coaches do a great job scouting throughout the week. The game plan was spot on, but they (Seton Hill) are a great team, and they played to their strengths, blitzing a lot,” elaborated Altavilla. The Griffins recorded six sacks on Altavilla.
The Lakers (2-6) will return to play California University of Pennsylvania on Saturday at Tullio Field. On the subject of California, which is currently 7-0, Altavilla said that “it’ll be a tough football game,.We got to play smart, do the things well that we’ve shown to do throughout the season and just play hard.”
California was ranked eighth in a American Football Coaches Association poll taken Oct. 17.