Carpe Diem: What it means 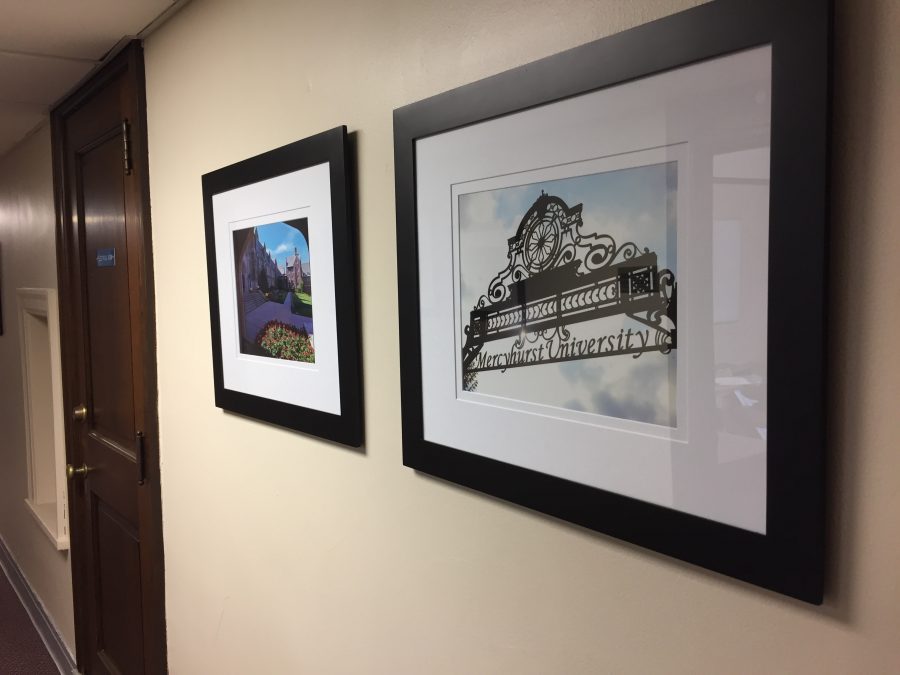 Two of the photos on the second floor of Old Main.

What does it look like to be a Laker? New pictures of current students, historical Mercyhurst and campus shots were put up over the summer throughout the first and second floors of Old Main to answer that very question. Many people love the new decorations in the building, but few actually know where the pictures came from or who initiated this project.

Within his first year as president, Michael T. Victor has been the driving force for many new and engaging projects at Mercyhurst. His theme as president is “Renewal Through Mercy: The Next 90 Years.” This project especially embodies that theme because it is a way to reflect on the past, celebrate the present and look toward the future.

The pictures were a collaboration by not only the president’s office, but marketing, advancement and the archivist.

“It was really a group effort,” said Lindsey Frank, director of Alumni Engagement.

The goal of this project was to bring more student life into the halls. The hope is that as alumni and prospective students alike see the pictures, they will be inspired by Mercyhurst’s vivacity and growth throughout its early and current history.

The pictures on the first floor of Old Main showcase the beginnings of Mercyhurst and the people that helped form the university we have today. They include pictures of the blessing of the gates, Mother Borgia Egan with the students and even the first basketball game at Mercyhurst. It is with these pictures of our past that we can look to the future.

“It is very important to see and appreciate where we came from and who made us the school we are today,” Frank said.

What people may not know is that the second floor of Egan also received new pictures for the halls. Second floor Egan is primarily offices where students do not often frequent, so those who work there were glad to see the pictures give new life to the floor through the photography of the campus itself.

Each person got to choose what picture hangs outside their office, depending on preference or the role they play at the university. Frank loves the picture of the sun shining through the open Mercyhurst gates that she chose for outside her office because it shows the hospitality and welcoming spirit that the school has to the community, students and alumni alike.

The second floor of Old Main has become much more student central. Last year student and community artwork hung on this floor, but it was time for a change the space is now filled with pictures of students in classes talking with teachers, competing in athletics or just hanging out on campus. Each one tells a story and means something different to each individual.

“Even if you have never been to Mercyhurst or know who we are,” said Frank, “you can see a clear picture of what it means to be a Laker through these pictures.”
They show the importance of seizing the day every day, therefore embodying the spirit of what it means to “Carpe Diem.”

“It means to enjoy the moment,” said Frank. “That’s what Carpe Diem is all about— enjoying everything around you.”