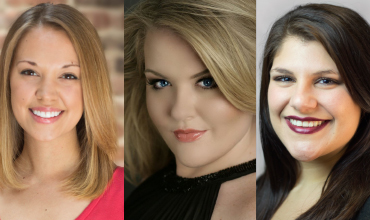 On Nov. 14, at 8 p.m., the Roche Guest Artist Series is hosting a concert for three of Mercyhurst’s highly esteemed vocal alumnae.
Devon Meddock, soprano,  Kathleen Reveille, mezzo–soprano, and Alexa Zeremenko, soprano, have all graduated from Mercyhurst and successfully pursued careers in the music industry.
All alumnae performed at least three roles in operas such as “Le Nozze di Figaro,” “Madame Butterfly” and “La Cenerentola” while attending Mercyhurst University.
The performance experience and the overall music education provided by Mercyhurst University was quintessential in furthering their musical careers.
Meddock continued her studies in 2014 at New York University at the Steinhardt School.
In 2016, she was invited to stay at NYU as an adjunct professor.
Zeremenko is currently a graduate student at Indiana University, which houses the largest and most prestigious opera program in the world.
Reveille is a mezzo-soprano who not only sang numerous leading roles while obtaining her undergraduate degree at Mercyhurst, but who has also sang with the Erie Philharmonic, in Poland as a guest of the government and at Yale, where she is earning her master’s degree.
The alumnae will be singing three groups of German songs, three arias they have used for audition and competitions, and a final trio from “Der Rosenkavalier” by Richard Strauss.
The concert is in Walker Recital Hall and is free of charge.