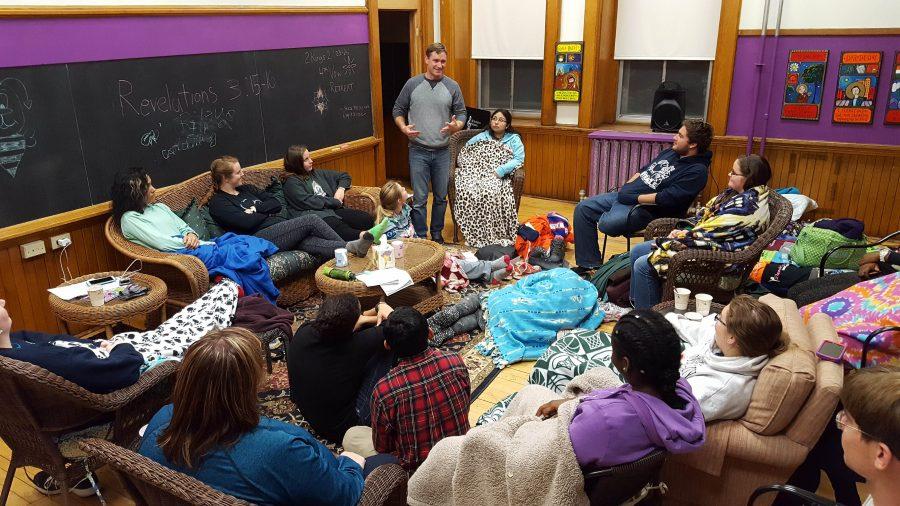 At the Fourth Vow retreat, students reflected with Greg Baker on the events that had transpired earlier that day in the city.

Over the weekend of Oct. 21-23, Mercyhurst students had the chance to step out of their comfort zone on the Fourth Vow retreat.

Colin Hurley, director of Community Engagement, and Greg Baker, director of Campus Ministry, were the main organizers of the Fourth Vow retreat. By design, they want to keep elements of surprise with these retreats so a lot of the details are kept confidential.

The retreat allowed students to get a sense of charity and mercy and how that works to challenge them. This helps students understand themselves and the “other.”

The “other” means the people who are different, which is a cause of fear that people have with one another.

“There are is a lot of rhetoric in the news which shows there is a lot of underlying fear,” Hurley said. “When Greg and I met several months in advance to design these experiences, we were hoping to confront some of the injustices and a lot of the fears that we see in society.”

They paralleled the story of Catherine McAuley to juxtapose their situation on day two when they went into the inner city and stayed in the Benedictine operated facility called “Space to Create.”
They did neighborhood surveys on the east side of Erie, partnering with the House of Mercy in the U.S. The students went out in pairs and did neighborhood canvassing around issues that are present in residents’ lives.

“Most students got three or four houses to open the door for them, and I think it was a step toward how do we get the student to ask and knock and confront others,” Hurley said.

That afternoon, the students were given a series of challenges to meet people and give back to the city. All of these students have been on a Carpe Diem retreat. “It was a nice segue because they were taking it up a notch and saying ‘where does my story blend in with the community’s story?’” Hurley said.

“Carpe Diem, to seize the day, is not just about being comfortable with yourself and your story, but that your real happiness is found when you start recognizing the ‘other’ and start encountering other people and you start learning what it means to serve and to love people,” Baker said.

The challenge for the students was leaving them with the question “what is your fourth vow?” It is a critical thinking challenge that they are left with. “We check in with them over time, we don’t just leave them. We continue to cultivate that relationship with them,” Hurley said.

The third day they met with Pastor Charles Mock from the Community Baptist Church. Few of the students identified as Baptist, so attending this church was another opportunity for them to experience those with different traditions through conversation and a meal.

When deciding the design of the retreat, organizers needed to outline a challenge for the students. “How do we get students uncomfortable by brushing up against and colliding with some of the issues we see in the news? Our students are now wrestling with that in a good way, not a confrontational way,” Hurley said.

Overall, according to Hurley, the Fourth Vow retreat was a success and will most likely become an annual affair.