The Board of Trustees approved the creation of a formal, written policy from a long-standing, yet unwritten policy of acquiring private properties to expand Mercyhurst College’s boundaries. 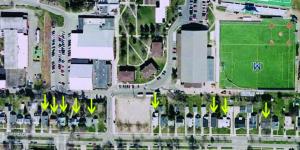 Google Maps/ Merciad photo illustration: The yellow arrows indicate the nine properties Mercyhurst owns on Parade Boulevard west of campus. The college owns 13 total properties off campus. The Mercyhurst Campus is the largest single property in the city of Erie.

According to the minutes from the Jan. 27 Board of Trustees meeting, the new policy permits the college to use “$150,000 of the annual operating margin to acquire private homes primarily bordering the boundaries of the Erie or North East campuses or as otherwise determined by the college administration to be strategic acquisitions.”

Mercyhurst Vice President for Finance and Treasurer Jane Kelsey explained the reason for the new board policy.

“Although such acquisitions had been our practice, we had never put it in writing as a board policy, and we ought to put on paper what is our practice,” she said.

The purpose of acquiring these homes is “to give the college flexibility to expand its boundaries in the future,” Kelsey said.

To acquire these properties and houses, Mercyhurst College is “going through due diligence and using college resources appropriately,” she said.

Even so, Kelsey said the amount of money Mercyhurst College has spent to acquire these homes is “hard to say.”

To date, Mercyhurst has purchased 13 houses. Two of those purchases occurred when the City of Erie installed the traffic light in front of the gates. The college bought these properties out of a “moral obligation,” Kelsey said.

The college plans to soon add another property to this total.
The house the college wants to purchase is located at 3831 Parade Blvd. It is listed at $114,900.

The home appraisal came in at $104,000 and “by our policy, that’s what we offered, and they accepted,” Kelsey said.

Once the homes are purchased, Kelsey said, they are “used as rental properties, largely rented by either faculty or administrators.”

She said Mercyhurst does not plan to create new buildings on these properties.

“If we would want to use the houses for purposes other than residential we would have to get a zoning variance from the city, which might be very hard to do,” Kelsey said.

Even though Mercyhurst does not currently plan to build on these sites, these plans could change in the future.

Kelsey used the apartment buildings on Briggs and Lewis, which the college acquired in the late 1980s, as an example of plans changing.

“The sisters of Mercy back in the 1960s probably did not envision going farther east and acquiring those buildings and using them as student housing,” she said.