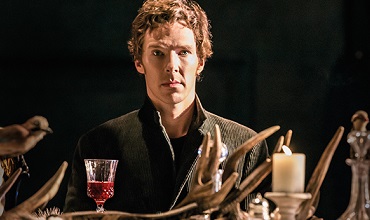 Benedict Cumberbatch as Hamlet in the National Theatre Live rendition of the classic tale.

The National Theatre Live is a unique way to view a movie as it is performed in real time without traveling very far or paying high rates for tickets.
The production performance is live in the United Kingdom and it is transmitted to theatres and performance spaces throughout the world, including Mercyhurst University.
This production premiered in 2015, but it will be shown again in the Performing Arts Center.
“Hamlet” is a tragic play about a recently deceased king who is out to find who killed him.
Throughout the play, the king’s son, Hamlet, vows to avenge his father’s murder.
King Claudius, the new King of Denmark since the death of King Hamlet, sees the young Prince Hamlet as a threat to his throne, so he has him sent away.
Young Prince Hamlet however learns of the evil king’s plan of ruling the kingdom and immediately returns home.
A bloody and fatal duel ensues, with numerous casualties and many chilling confessions.
Benedict Cumberbatch stars as Hamlet.
It is directed by Lyndsey Turner and is produced by Sonia Friedman Productions.
If this dramatic and tragic tale strikes your fancy, then join us Nov. 20, at 12:55 p.m. in the PAC.
Tickets are $18 for adults and they are free for any Mercyhurst student who shows their ID at the box office.