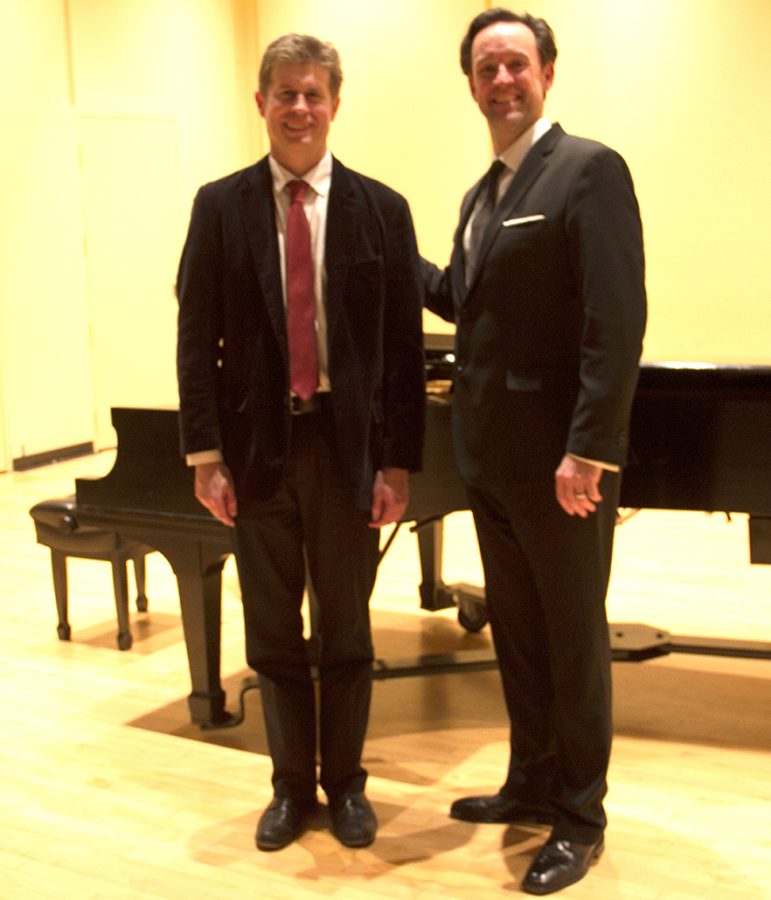 On Nov. 9, at 8 p.m., James Bobick, baritone, gave a recital of French, German and English art songs, accompanied on piano by Nathan Hess, D.M.A., D’Angelo Department of Music chair and assistant professor of piano.
James Bobick, instructor of voice, opera and diction for singers, has led an exciting career as a baritone, ranging from roles in operas by composers as varied as Verdi, Mozart and Donizetti to contemporary composers such as Heggie, Adamo and Eaton.
Bobick began with the 20th century French composer Jacques Ibert’s “Chansons de Don Quichotte.”
Hess began the first movement, “Chanson du depart” (“Song of departure”) with a dreamy piano introduction with a slight note of intensity.
Bobick entered a capella, and throughout the work, he mainly sang a capella with only a few chords provided by Hess at the ends and beginnings of phrases, so that the whole movement was reminiscent of a recitative.
Bobick finished the song with a full crescendo on the word “aventureux” (which translates as “adventurous”).
The next movement, “Chanson á Dulcinée,” (“Song for Dulcinea”), was an upbeat song in the major mode, featuring melismatic “Ahs” that Bobick carried through with tension and energy toward the following words of the repeated phrase occurring three times throughout the song: “Ah…Un an me dure la journée si je ne vois ma Dulcinée.” (“Ah…a day lasts a whole year if I do not see my Dulcinea”).
The fourth and last movement, “Chanson de la Mort de Don Quichotte,” (“Song of the Death of Don Quixote”), closed the set.
This movement was interpreted painfully and beautifully by both Hess and Bobick. Bobick’s sobbing tone sang out over dark chords on the piano from Hess.
Bobick executed a soaring crescendo full of pathos on the climatic line “Si tous les livres m’ont tué” (“If books have killed me”), and his pianissimo high E natural, written by Ibert specifically to show off the great Russian bass Chaliapin’s vocal prowess, was superb.
Bobick’s second set was the German Romantic composer Johannes Brahms’s Fünf Lieder, Op. 94. The first movement, “Mit Vierzig Jahren” (“At Forty Years Old”), which featured a musical conversation between Bobick and Hess from the accompaniment and vocal line.
Both Hess and Bobick built the line “Und eh du’s denkst, bist du im Port” (“And before you know it, you will be in port”) dramatic, tense repeat line.
The tension came to end with a calming resolution. Bobick sang the final word, and Hess continued with a rolled chord, which illustrated beautifully the weary man’s final homecoming.
The third movement, “Mein Hertz ist Schwer” (“My Heart Is Heavy”) began with Hess creating a restless, anxious undercurrent of sound while Bobick sang the part of the reserved, staid old man reminiscing on his lost youth, until, unable to keep his emotions in check any longer, the song built into a dramatic conclusion.
The last movement, “Kein Haus, Keine Heimat” (“No House, No Homeland”), began with a motive in the piano from Hess that appeared again in Bobick’s vocal line in the words “Kein Haus, Keine Heimat.”
The song ended abruptly and effectively with Bobick’s final line, “Welt, fragst du nach mir nicht, was frag’ ich nach dir?” (“World, if you do not ask about me, why should I ask about you?”), followed by an angry, emphatic chord from Hess.
Bobick’s third set was Songs of Travel by the English composer Ralph Vaughan Williams.
The set began with the popular tune, “The Vagabond,” which Bobick and Hess interpreted simply and effectively.
Hess’s march–like, staccato rhythms on the piano and Bobick’s energetic, controlled vocal line captured the essence of the traveling vagabond.
The seventh song in the cycle, “Whither Must I Wander,” is perhaps the most well-known song in the cycle.
Bobick sang through the sweeping melody in this simple, yet powerful song and expressed its story beautifully.
The last song, “I Have Trod the Upward and the Downward Slope,” was perhaps the most powerful song performed at the recital, an impressive feat given that Bobick had already been singing for an hour.
The song began with a weary, plodding intro on the piano from Hess, after which Bobick entered on the vocal line with a full, strong powerful sound.
The song closed with ascending chords in the piano and a gorgeous pianissimo high D from Bobick.