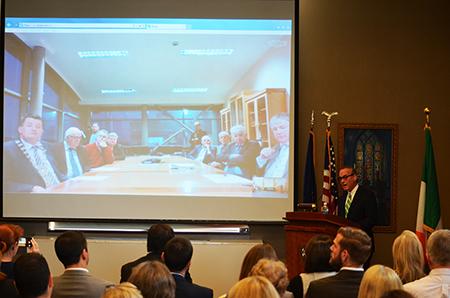 Recently, Mercyhurst announced its intention to look into expanding its operations in Dungarvan, Ireland.

This study will look at the current state of Mercyhurst and determine if it could be plausible to have the opportunity for every student to spend a semester in Ireland at little or no cost. The study will span over the course of the next year and will include market research, financial overviews and asking students, faculty and alumni their opinions and to ultimately decide on whether this is a viable option for Mercyhurst at this time.

In terms of study abroad, the vision would be to make it so that every Mercyhurst students would have the option to study abroad for at least one term and without the substantial cost that is associated with studying abroad.

The goal would be for every student to have the option to study abroad in Ireland. In doing so, entire departments would be able to go abroad without interrupting student coursework. It would also give students a global perspective and give more foresight and experience in the increasingly global job market.

“What we really hope for the students is that it brings home our Irish heritage. It brings full circle that Mother McAuley came from Dublin to the United States. We’re bringing Mercyhurst back to Ireland,” Hosey said.

This expansion would become an integral part of the Mercyhurst experience and would really allow students to understand the mission and heritage and how it all connects to the Sisters of Mercy. It would globalize the university and distinguish it from other institutions in the level of commitment to the heritage and roots.

This project has the possibility of bringing many new and exciting things to the Mercyhurst community and the expansion can only further the experience of Mercyhurst students.