Apollo’s Fire will be lit 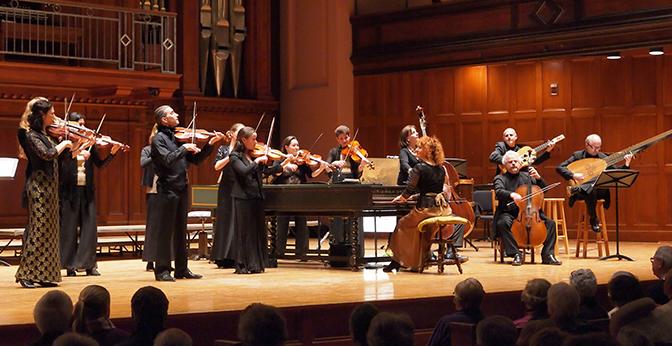 As the fall semester begins to wind down in the last few chilly December weeks, one last event of the season is gearing up to go.
On Dec. 15, at 7:30 p.m., the Mary D’Angelo Performing Arts Center will be welcoming the Cleveland Baroque Orchestra known as Apollo’s Fire to the stage.
Led by their conductor Jeannette Sorrell, an award-winning harpsichordist who also founded the orchestra in 1992, Apollo’s Fire presents an interpretation of Handel’s Messiah that has inspired audiences across the country through its acclaimed CD recording and many national radio broadcasts.
Following Handel’s original conception of the piece as theatrical entertainment, Jeannette Sorrell and her actor-singers take listeners on a spiritual and emotional journey.
The orchestra certainly lives up to its namesake, the classical god of sun and music, and thus has been dubbed “the U.S.A.’s hottest Baroque band” by Classical Music Magazine.
Apollo’s Fire has played sold-out concerts at the BBC Proms, the Royal Theatre of Madrid, the Library of Congress in Washington, D.C., the Tanglewood Festival, the Metropolitan Museum of Art in New York City and many other venues.
The Daily Telegraph reviewed a performance by Apollo’s Orchestra as “Superlative music-making European stylishness combined with American can-do entrepreneurialism.”
Tickets for this fabulous, can’t-miss performance are $25 for adults, $20 for seniors and $15 for youth and students with ID.
It is free for any Mercyhurst student who presents their ID at the box office.
This performance is sponsored by WQLN and H Jack’s Plumbing & Heating Co. The 2016-2017 season is sponsored by Cumulus Media.