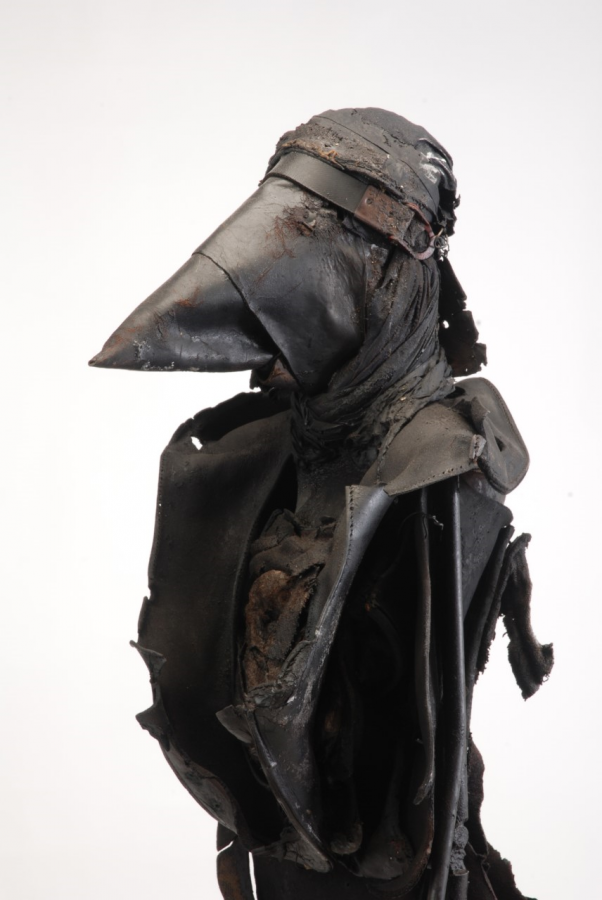 "BLACKBIRD" Found Objects, Wax, Wire, Carbon, Paint over welded Steel 65”x 13”x 13” One of the sculptures that will be present in the gallery.

While students and faculty are moving forward in different directions and in different locations, the Cummings Art Gallery is advancing to present its next exhibit.

This exhibit, “Repurposed,” will feature works from Ronald Gonzalez and Mercyhurst’s own art faculty, Daniel Burke. The works displayed are mixed media with recycled and repurposed materials.

Gonzalez, a professor of Art and Sculpture at Birmingham University, obtained a B.A. from the same school in 1982. He has won the  Binghamton University Chancellor’s award for Excellence in Scholarship and Creative Activities along with several grants from different foundations. He has had several artist residencies such as: Yaddo, Saratoga Springs, New York.; Sculpture Space, Utica, New York.; and John Michael Kohler Art Center, Sheboygan Wisconsin.

Gonzalez’s recent works have leaned more towards black figures, which represent a non-human mode of thought. These figures are made from schematic steel armatures put together from a range of objects, antiques and collectibles. Then, they are exposed to different things such as metal fillings, burned wax, glue and black soot to create a dramatic variety.

Burke, from Erie, got his B.A., with the help from the GI Bill, from Mercyhurst University where he is currently a Professor of Art,  and received his Master’s from Edinboro University. He is an artist- in- residence on two occasions at the MacDowell Colony in Peterborough, New Hampshire.

“For subject matter I’m using birds (and cages) and mice (in mazes).  The art, however, is about shapes, colors, texture, scale, and patterns, being guided by imagination,” said Burke. “There is a dawning concern that has entered my aesthetic regarding reclaiming, reusing, and repurposing inexpensive and impermanent materials.”

According to Burke’s website, art to him is “observation, search, focus, assembling, display, and “variations” [which was the title of a recent show and it conveys in a word his current art concerns].”

Burke has won prizes and honors in over 60 juried competitions and recently received the Bellinger Memorial Award at the Chautauqua National Exhibition of American Art. Along with awards, he has received a fellowship and grant for his work. Edinboro University gave him the title of a Distinguished Alumnus in Art.

Burke has done 30 one person shows along with several participation and invitational exhibitions. His solo shows locations include the Williams College Museum of Art in Williamstown, Massachusetts; the Southern Alleghenies Museum of Art; the Arlington Art Center and the Second Street Gallery in Charlottesville, Virginia; and Gallery 937 in Pittsburgh. Burke’s works has participated in shows such as  the Minnesota Museum of Art, El Paso Museum of Art and Butler Institute of American Art. He has been listed in several publications since 1973, including “Who’s Who in American Art.” Burke’s works are in the permanent collections of several museums as well as corporate and private collections.

As everyone makes their way onto campus and are wandering around and searching for their class locations, stop by the Cummings Art Gallery. It is free and open to the public. There will be a reception for meeting the artists on Jan. 19, 5 to 7 p.m.

“Repurposed” opened on Jan. 5, and will be on display until Feb. 5. The Cummings Art Gallery Hours are Monday through Friday, 9 a.m. to 4 p.m. and Saturday and Sunday from  2 to 5 p.m.