Traveling around the world 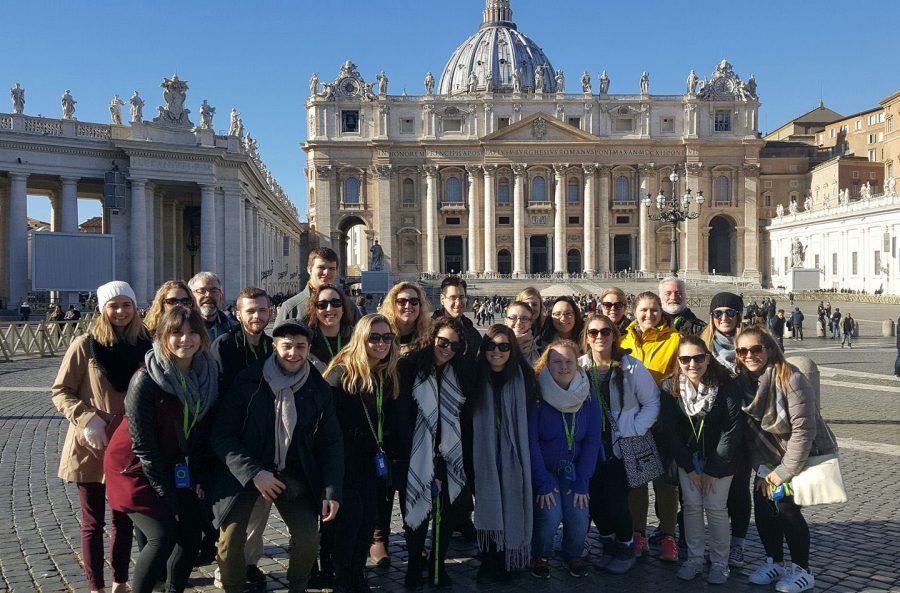 While the average student was home catching up on sleep and relaxing with friends and family, three groups of Mercyhurst students used their winter break to explore new countries and make memories they will never forget.

Students and faculty traveled to the Dominican Republic, the Mediterranean, and the Galapagos Islands for trips of service and learning.

Susan Johnson, chair of the Education Department, was excited about the trip that she and 18 students experienced in the Dominican Republic. Only a few people on the trip had been to the Dominican, but none had been to the poorer areas of Cabarete and El Play where the group’s service was done.

“You don’t really ‘see’ the Dominican if you stay at a resort,” Johnson said.

The Mercyhurst group first went to Santo Domingo to work with their growing autism awareness programs. This is a developing field there, so the resources that the group were able to provide were invaluable.

The next nine days were focused on building a house for a mother and her children in the small and impoverished barrio of El Play. The task of building a house on the swampy ground was not easy.
“We built that house using a broken hammer and a piece of string,” Johnson said.

The house was built through the help of the Mariposa Foundation, which helps girls of the poor community achieve higher education and find job opportunities. Johnson said that the children there realize that their futures are very predetermined and that it is hard to break that cycle. That is why this foundation is so important. The hashtag #GirlEffect supports the foundation and hopes to end child prostitution and poverty that rampages the Dominican Republic.

Although the Mercyhurst group was the first outside aid the people of El Play had ever had, the entire community was incredibly selfless and welcoming.

“My favorite part of the trip was teaching and working with the kids of El Play. They all wanted to play and be friends with us,” said Cole Lowe, Spanish Education major and the group’s main interpreter. “They were not scared at all.”

This trip was also special because of the two research projects being conducted by junior Caitlin Nalipa and graduate student Kelley Hynes. Hynes’ project was a phenomenological study which involved interviewing 25 El Play community members to record their views on life and educational opportunities.

Nalipa’s project was a quantitative research project focusing on survey analysis of pre- and post-trip perception of poverty and people who are poor. She and Johnson will be presenting their findings at the World Special Education Conference in Australia this upcoming June.

Johnson, Low and Nalipa agree that those who went on this trip basically paid for a week of hard labor. However, everyone gained a lot from this once-in-a-lifetime experience.

“The people’s views on life really gave us a reality check. They are just grateful for living,” Caitlin Nalipa said. “It put into perspective how much we have and often take for granted and was very impactful for everyone.”

In contrast to the service trip of the Dominican, the Mediterranean and Galapagos trips had mini classes with them that would begin after the break.

“Traveling abroad with a class is a wonderful experience because we get to know students in a completely different way,” said Joanne McGurk, Ph.D., Galapagos trip professor. “Suddenly the concepts we are learning about become meaningful in a way that is hard to replicate in a classroom.”

The 31 students who flew into Quito, Ecuador, to explore the Galapagos were either enrolled in McGurk and Turner-Cooper’s class on Darwin’s “On The Origin of Species” book, or in Professor Pete Stadtmueller’s art class on using GoPro video editing and filming.

“This was definitely a nature lovers’ experience,” said McGurk.

The students did not focus as much on history and culture as the Mediterranean, but got the full experience of the islands through the wildlife. They went snorkeling with penguins, turtles and sharks, climbed a volcano, walked with giant tortoises along the beach and learned much more extensively about these creatures who were not afraid of being up close with the students.

The trip to the Mediterranean consisted of 21 students and two faculty members who would be enrolled in either Brian Reed, Ph.D.,’s Mediterranean Literature class or Snyder’s Capstone Ethics class.

“This trip was especially unique because there were a great mix of students from freshmen to seniors, and all types of majors,” said Reed. “Everyone got along really well and created lasting friendships. It shows how incredible Mercyhurst students are.”

Since the trip took place in January, the students got to explore many tourist attractions without all of the business of the usual season. They visited Barcelona, Spain, Nice and Monaco in France and Cinque Terre, Pisa, Florence and Rome in Italy.

“We got to do everything one would want to do in these amazing places,” said Reed. “We saw the David, Vatican City, the Sistine Chapel and the art and history of Florence all up close and without any crowds.”