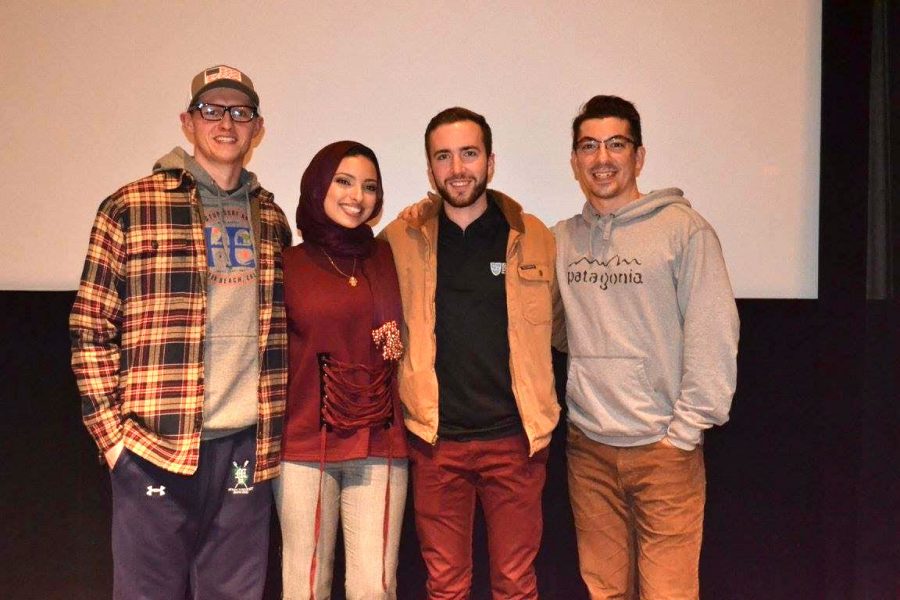 Noor Tagouri spoke at Mercyhurst on Monday. She talked about her journey as a hijabi journalist.

On Jan. 30, Mercyhurst Student Government showcased groundbreaking journalist Noor Tagouri in the PAC to an enthusiastic and welcoming crowd. Tagouri has been gaining international attention over the past few years from her presence on the online video news source Newsy and skyrocketing numbers of followers on Instagram and Twitter.

“MSG brings in two major speakers in the fall and spring,” said MSG Events Coordinator Heather Shadle. “I was very excited to see Noor Tagouri’s name on the list of available speakers for our budget and location.”

Shadle has been following Tagouri’s growth on social media on Instagram and Newsy and wanted to share her inspiring story with the campus. Tagouri travels all over the country to major cities, while stopping at colleges along the way. She gives talks on her journey in journalism and what it means to be a Muslim woman in today’s culture.

Tagouri’s successes are not only a major influence in the field of journalism, but social justice issues that are relevant to both America today and in the future. Her campaign, #letnoorshine, came from her name itself which means “light,” thus perfectly defining her message to let one’s inner light and passions become a beacon for the world.

This hashtag began her success and progress through platforms such as CBS Radio, Tedx, and Playboy’s stereotype-challenging project, Renegades. She also discussed her appearance on a major French news station that skyrocketed her popularity and groundbreaking appearance as a woman wearing a hijab on national television.

The focus of Tagouri’s talk was on the challenges she overcame to achieve her dream of becoming a “storyteller.” Growing up in a predominantly white community, she struggled with her identity from an early age. Tagouri’s parents are immigrants from Libya, although Tagouri was born in the United States.

She shared many stories of her childhood and of the challenges that come with breaking into a career that is severely lacking in minority representation. Through each story she told, Tagouri had an unending sense of optimism and determination for the future of journalism and for Muslims, women and all different cultures that live in America today as they try to pursue their dreams.

Shadle said she believes that this talk will be very important to the Mercyhurst community, especially in light of the new presidency and fears of negative civil rights changes.

“Mercyhurst strives to be an inclusive community for students of different cultures in America and internationally as well. Noor can speak from minority perspectives as a millennial, woman and a Muslim,” Shadle said.

Tagouri is especially relevant to the college community because of her young age and the fact that she began working toward her dream by starting college at age 16. During her talk she stated how much she disliked wasting time and encouraged us all do make the most of our opportunities now. Her resolve and determination prove that you don’t need to be much older than we are now to make change.

“This goes to show that there are movers and shakers out there who are our age (she is 23). She is working to make as much change as she can,” Shadle said.
“College students at this point in their lives have the opportunity to make all these changes they just don’t realize they can,” Shadle said.

Tagouri’s way of life is an inspiration in itself as she continues to challenge people’s perspectives and stereotypes through her role as journalist and advocate for the education of others on her religion and culture.

“Everyone has a story,” said Shadle. “Noor proves that by telling your own story and finding other people who listen, you can break down these barriers to make great accomplishments in your own life.”