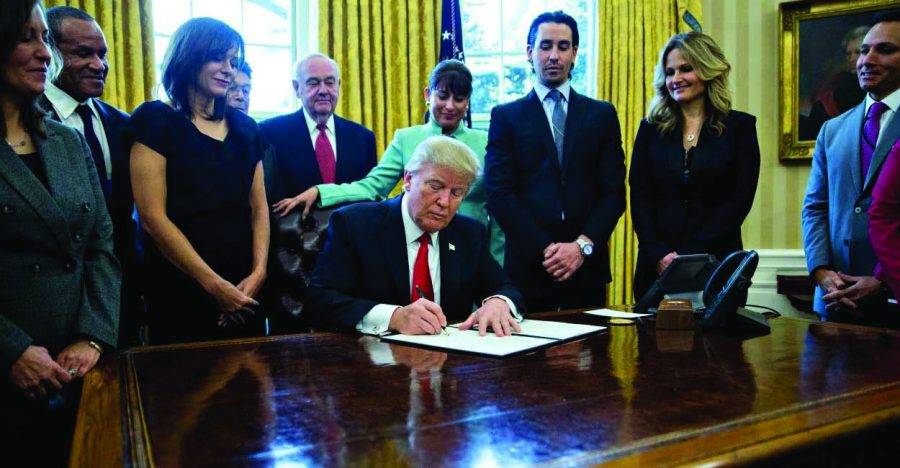 President Donald Trump continues to define his presidency as a wave of change for the nation as his second week in office brings a controversial executive order. On Jan. 27, Trump issued an executive order banning immigrants and refugees to the United States from seven Middle Eastern and African countries.

The order outlines purpose and procedures for protecting the nation from foreign terrorist entry into the United States, which is also the name of the order. It outlines the review that will be immediately performed for any person seeking entry. The seven countries that are a part of this order are Iraq, Syria, Iran, Libya, Somalia, Sudan and Yemen.

Banning of these seven countries from entry is meant to lighten the load of the investigators. In section 3, subsection c of the order, Trump states that allowing immigrants and nonimmigrant entry to people of these nations would be detrimental to the United States.

The order goes on to say that entry will be suspended for 90 days, minus those here on diplomatic visas, North Atlantic Treaty Organization visas, visas for United Nations travel and International Organization Staff visas.

Some have noted that these countries were on former President Barak Obama’s watch list for potential terrorist activity. However, the controversy began as people learned that there have been no reported terrorist acts from these seven countries, but instead from countries such as Saudi Arabia, Lebanon and United Arab Emirates.

“What I find so troubling about the ban on refugees is that there is no evidence for refugees doing acts of terror,” Greg Baker, director of Campus Ministry, said.

According to Trump, the primary cause for a ban such as this is national security.

“In order to protect Americans, the United States must ensure that those admitted to this country do not bear hostile attitudes toward it and its founding principles,” the executive order said.

The president was adamant throughout his campaign about making the country safe again and putting Americans first, but many see this order as unreasonable due to the lack of empathy for refugees fleeing their war-torn countries.

“I am all for taking severe measures to protect our country and its borders, even making visa processes more strict to accomplish this,” said Houssem Hamrouni, Fulbright foreign language teaching assistant. “It is the right of every country to do so. However, I do not believe in it to the extent of banning entire countries.”

“We can’t just open our borders to everyone. We must have processes to regulate things or we would have a major homelessness issue,” said Richard McCarty, associate professor of Religious Studies. “This shutting off of entire countries is based only in fear.”

The ban is also under scrutiny for its regulations on green card holders and vetted immigrants. Immigrants from these counties who were settled and productive members of the American society will now have to go through serious processes of investigation. The New York Times says the current vetting and immigration process can take upwards of two years to be completed.

“There are categorical distinctions between refugees and immigrants,” said McCarty. “Refugees need to leave their homes because of violence, warfare and devastation the United States has never seen before. This process may be too long for some already.”

Now, due to the order, any refugees looking for aid in the United States will have to wait even longer to potentially receive it after the ban. The executive order explains that the United States Refugee Admissions Program will be suspended for 120 days.

“During the 120-day period, the Secretary of State, in conjunction with the Secretary of Homeland Security and in consultation with the Director of National Intelligence, shall review the USRAP application and adjudication process to determine what additional procedures should be taken to ensure that those approved for refugee admission do not pose a threat to the security and welfare of the United States, and shall implement such additional procedures,” the order says.

As a Muslim, Hamrouni was upset upon hearing the countries affected by the president’s order. The most controversial part of the immigration policy is the fact that each of the seven countries is a primarily Muslim state. He was not directly affected because he is from Tunisia, but he and many other Muslims in America fear that the ban may spread to other countries as well.

Some Americans fear Muslim extremists and terrorists based on acts in the past, but critics say this ban is only enforcing a stereotypical mindset and blanket statement for the entire religion.

“Muslim people do crazy things sometimes, but these people are only representing themselves and their actions,” said Hamrouni. “This has nothing to do with Islam. They are just misrepresenting the religion very badly.”

Part of America’s heritage and image is the land of democracy and diversity. Some fear that the executive order may take a large toll on that very ideal and our relationship with Muslim countries.

Both Baker and McCarty stated that we should support our country and wish success for our president, but also stressed the importance of being in contact with our lawmakers to change laws that we are against.

“Not being engaged is not an option. Our policies have a huge impact on people’s lives,” said Baker. “If you feel passionate about an issue, stand up and let them know.”

The Mercyhurst community is taking all actions possible to make all international students, not just those from Muslim countries, feel welcomed and accepted.

“We should make sure that our American culture stays diverse even among all the division,” said Baker. “It is also clear out of our Catholic identity that we have an obligation to help others. We must welcome everyone, especially those in most need like the refugees.”

McCarty also expressed that if you want to do something about it, then advocate.

“We each need to say ‘you are welcome here.’ Our core values of our institution — we aren’t only here to get a good education, but to be good people and increase in character,” McCarty said.
Hamrouni has already seen and felt the acceptance of the Mercyhurst community.

“There have been lots of professors coming to comfort me and I see this as a very good sign,” said Hamrouni. “This is my idea of America and I really want it to be this accepting for a long while.”

Mercyhurst recently released a video on social media in which many departments, students and faculty, all sent the same message to anyone feeling lost or alone: “You are Welcome Here.”

“Our international students and faculty enrich our campus immeasurably,” said Baker. “They bring their own unique culture, ideas, beliefs and so many other good things to all of us here. I can’t imagine a campus, let alone an entire country, without them.”