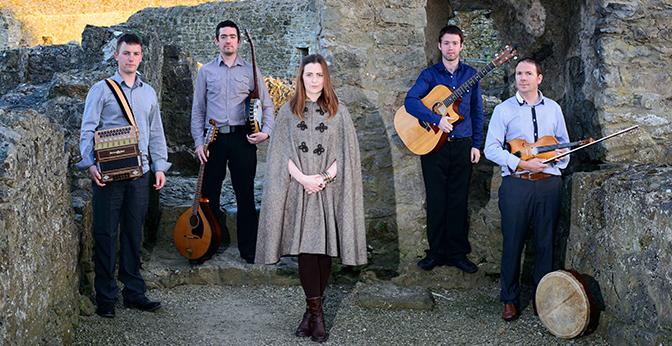 Caladh Nua to perform in the Mary D’ Angelo Performing Arts Center on March 2 at 7:30 p.m.

What better way to embrace Mercyhurst’s Irish Heritage than by going to see Caladh Nua (a Gaelic word meaning “a new or safe port or anchorage”) on March 2, at 7:30 p.m.?
They are an Irish band with their origins deeply rooted in the southern counties of Ireland, according to the website.
The band is composed of five musicians and singers playing instruments including banjo, fiddle, guitar, bodhran, tin whistle and button accordion.
The band consists of Derek Morrissey, who plays the button accordion; Brian Mooney, who plays the tin-whistle and the banjo; Lisa Butler, who sings and plays the fiddle; Caoimhín, who plays the tin-whistle, uilleann pipes, flute and guitar; and Paddy Tutty, who is the band’s lead fiddle player and plays the bodhran.
In the words of FolkWorld, Caladh Nua “will warm your souls and set your toes tapping.”
Danny Matheson from Celtic Music Radio says “Irish music at its best.”
They are currently on tour right now and our Performing Arts Center is their second stop.
If you are not 100 percent sure you will like them, they have clips and their Soundcloud on their website to get a taste of their music.
Their albums are available through iTunes and Amazon.
To see the performance on campus, tickets are $20 for adults, $15 for seniors and students/youth are $10.
However, Mercyhurst students can get a ticket  for free with their student ID.
They will be on tour until March 18 and will perform in several cities in Pennsylvania.
Caladh Nua respectfully delivers the music of their heritage and  seamlessly carries it forward into the future.
Come celebrate Mercyhurst’s, or even your own, Irish heritage with Caladh Nua.