Tennis opens 2017 with win against Daemen 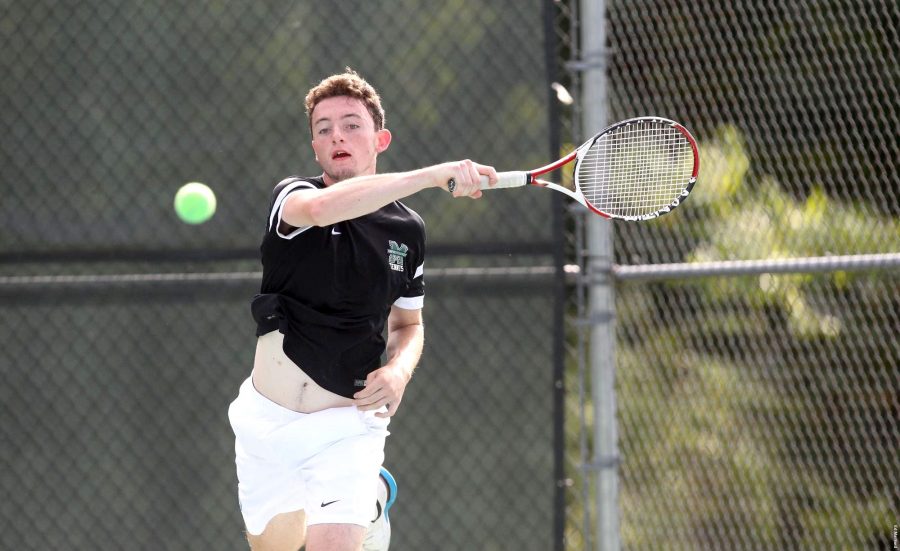 Freshman Cormac McCooey came off victorious No. 2 singles and at No. 2 doubles alongside his brother Conor McCooey.

On Feb. 5, the Mercyhurst men’s tennis team started off the 2017 portion of the season with an 8-1 win against Daemen College.
This is the second team match of the 2016-2017 season for Mercyhurst, the first being a 9-0 win against Allegheny College in the fall.
Previously, the tennis team participated in the ITA Championships held on Sept. 23-25 and the PSAC Singles/Doubles Championships held on Oct. 7-9.
Five of the six singles matches of the day went to Mercyhurst. Junior Nenad Terzic started off with a win over David’s Gonzalez Villegas, scoring 6-4 and 6-3 in their matches.
This was followed by Freshman Cormac McCooey, who bested his opponent Fabian Wilde, 6-3, 6-0, in the second singles match.
Daemen’s sole win of the day came when Ricardo Ruiz Martinez beat Mercyhurst senior Joaquin Aguilera, 6-2, 6-7, 1-0.
The next three singles matches resulted in ‘Hurst victories, with senior Conor McCooey winning 6-0, 6-4 over Mark Veitengruber; freshman Sebastian Pardo with 6-4, 3-6, 1-0 over Justin Milner; rounded out by freshman Arseniy Sklyarov winning his games, 6-2, 6-0, over Andrew LeMar.
Doubles matches were a sweep for Mercyhurst. Aguilera and Terzic won the first match with a 9-8 win over Veitengruber and Milner. The second match saw the McCooey brothers go 8-1 over LeMar and Wilde, and the third was won by Sklyarov and Pardo over Villegas and Martinez, 8-6.
Conor McCooey has a 33-9 singles record for his career, and a 25-18 doubles record. In addition to this, he and his brother Cormac make up a doubles team that is ranked No. 6 in the Atlantic Regionals Conference.
“I think the 8-1 win was a good first result for the team,” Conor McCooey said. “First match back after break is always tough, and we played solid. Our doubles teams need some work and singles will improve as the season goes on.”
The next time the Lakers take to the courts, will be Feb. 12, against Duquesne University in Pittsburgh.
“It’s going to be a tough match,” McCooey stated. “They’re a decent DI school and we lost 8-1 last year to them. I think we were more competitive than the score line indicates.
“All you need is five points ,and I would bet at least five of our guys outplay their opponents on any given day.”
The first PSAC match of the season will be March 3 against Millersville University at Pennbriar Athletic Club. Mercyhurst is currently 2-0.