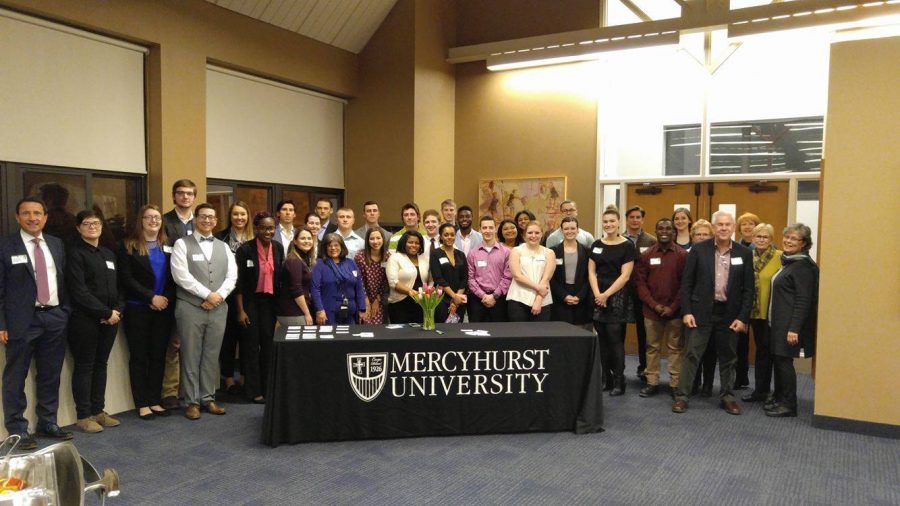 Lev Kubiak, chair of Student Life Committee, began the meeting by explaining the five core values of the Board in their fiduciary responsibilities to the school.

“We are here to, one, represent students’ interests in the board’s policy making activities; two, ensure adequate resources for student life programing; three, to keep pace with the changing needs of students; four to have oversight in the admissions and enrollment strategies; and five, to have oversight of athletics and planning facilities,” Kubiak said.

“Somebody on the committee many years ago had the foresight to add one more thing; ‘we will meet three times a year as a committee, and from time to time it may be appropriate for the committee to meet with students in an open session to hear their concerns and discuss student issues and topics. So tonight is that night; we meet once a year and we hope to continue it,” Kubiak said.

The students in attendance were chosen by Mercyhurst Student Government. There were students from each of Mercyhurst’s campuses: Booker T. Washington, North East and Main Campus.

There were 45 students invited to the event and 32 attended.

As the purpose of the gathering was to discuss student issues, they started off talking about Greek life at the ’Hurst and their reservations about it entering the small population on the hill.

“One thing that I would like to see not introduced is Greek life. I know that is something that President Michael T. Victor is very seriously considering and I don’t think that adding it would be in the best interest of the school,” said Kimmie Kramer, junior Intelligence major. “I am president of Ambassadors and (while) giving tours, it’s one thing that a lot of students love about Mercyhurst, and especially since the three other colleges in the area all have it, I think that’s something that sets Mercyhurst apart.”

“From Student Government’s standpoint, we are really trying to push inclusiveness and not making people feel excluded for being different, and I feel like getting Greek life really will make it exclusive. When I came here, I wasn’t an athlete and when you’re not an athlete, you’re already excluded, which is fine, but then to not get into the few sororities or frats that we would have, would make people feel even more excluded and not accepted. It’s just going to make it harder to reach our goals of really accepting everybody,” McGrogan said.

Residence Life had a representative voting down Greek Life as well.

“I’m an RA in Warde Hall and a lot of my residents are coming to me as well and voicing concerns in dissent of that endeavor. I’m not inherently against it, but I think that it is important to gauge student input a little bit more before implementing something that drastic,” sophomore Vince Marrazzo said.

He added that many of his residents that are advocating for Greek life sound as though they just do not want to have a Resident Assistant in their hallways.

Christian Copper, sophomore Intelligence major, concluded by saying he believes that Greek life can be a great addition to large schools, as this is how students meet people and make friends, but at such a small school, the students are already seeing the same people every day and interacting with them without adding in Greek life. He said he believes the aspects that you gain from it are lost here in such a small community.

Richard Lanzillo, Board President, asked if there is much of a presence of the Sisters of Mercy on campus and how that affects the various activities on campus. MSG and Ambassadors piped in, explaining that each of the events they plan on the weekends as an alternative to drinking are planned specifically with the sisters in mind.

“We could have any of the sisters come in during any of our events and we don’t want anything that is going to offend them. We just think that they could stop by at anytime, so we think about that for every event. We are even cognizant of that for Springfest,” McGrogan said.

Another topic discussed at length was student housing. This was met with various horror stories that students have experienced while living on campus and dealing with maintenance.

“It needs a lot of work, not necessarily massive overall fixes. I think people understand that this university is growing rapidly. It’s in a bit of a transition phase right now; there’s going to be growing pains. There’s a(n) (intercom) outside of my building, it doesn’t work and it says ‘Mercyhurst College’ on it. It gives the impression that everything is really old, everything is really ugly,” Copper said.

There is a disconnect in types of housing from freshman year to the upper classmen years. The students agree that moving from Warde, Baldwin or McAuley to the Briggs or Lewis apartments has a jarring effect on them.

“It’s a step down from Warde to a Lewis apartment that you’re not really not ready for,” Copper said.

Others discussed holes in the wall that allowed them to see the pipes, doors that have been painted so many times that they would not close properly and even mold that was not taken care of properly.

There were also mixed reviews on the change to the REACH curriculum. Some students have not noticed much of a change. Others love the freedom to take more classes from different areas, but some believe parts of the liberal arts education has been lost.

All of the trustees listened very openly and were very willing to hear what each and every student had to say.

“It’s been very informative and great to hear from everybody. It’s good to get this feedback, you know, because when you’re talking about these things in committee, you’re getting it at about the 35,000-foot level, and I’m impressed by the detail. This is the first time that I’ve realized that people pay to receive credit for internships,” Patrick Wechler, a member of the academic affairs committee, said.

Other topics such as adjunct versus full-time professors, summer tuition costs, a campus-wide grade scale, campus dining, gym hours, science department laboratory upgrades and more were discussed as the students rotated around the room to each of the trustees.

Many students gave informative feedback and seemed grateful to be included in such an important aspect of getting to decide things on campus.

“It’s definitely a good idea. We are literally meeting the higher ups that will be implementing things, we get to give our opinions to help. It’s so much easier to do this in person and I think it will be a productive meeting,” Favour Ehidiamhen, junior Accounting and Finance major, said.

Other students look at it as a sort of investment and feel obligated to attend to give their opinions.

“One of the best opportunities any person can have when you’re making an investment like we are is to talk to the person you are making the investment to and make sure you both understand things from the others’ perspective. I think the important thing is, if I have an opinion I have the opportunity to voice it,” Copper said.