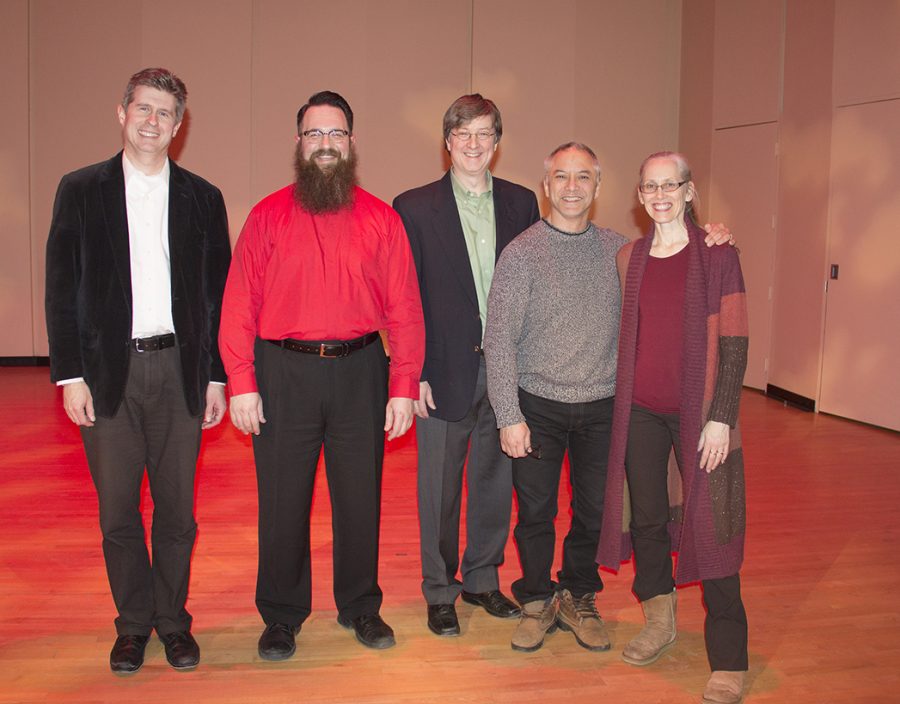 On Feb. 15, music lovers and Francophiles alike braved the snow and cold to attend violinist Jonathan Moser’s faculty recital, “A French Soirée.”
Listeners were treated to pieces by French composers such as Debussy and Ravel, with notes delivered informally by Moser himself before each piece.
His unassuming demeanor may have charmed the audience, but it was his thoughtful, passionate playing that captivated them.
It was certainly a bold choice on Moser’s part to begin his recital with the best piece.
At times playful, at times boisterous and at times heart-wrenchingly vulnerable and exposed, Darius Milhaud’s “Suite for violin, clarinet and piano” was the crown jewel of the evening.
Moser was joined in the trio by Nathan Hess, D.M.A., on piano and Rebecca Wunch on clarinet, and the synergy of the performers was remarkable.
The three instruments meshed together seamlessly throughout the piece, with two of the instruments occasionally drawing back to allow the third to cut through the texture, adding emotional layers.
The next piece was the only solo piece of the evening.
A change came over Moser as he played Eugène Ysaÿe’s “Ballade.”
His bearing lost the easiness that characterized the majority of the evening’s performance and his face was overcome by an intensity that betrayed his total focus on the music.
Moser’s playing has a certain musicality and emotional quality that goes beyond mere technical proficiency.
Hess joined Moser again for Claude Debussy’s “Sonata for Violin and Piano.”
This piece afforded another example of the intangible link between the two musicians, an almost intuitive, musical connection ever-present throughout their playing.
Their ability to take a piece that is beautiful in its own right and to add another layer of emotion and beauty while making it seem effortless is to be marveled at.
After the intermission, the feeling of the recital shifted slightly. Scott Meier, Ph.D., on alto saxophone, joined Moser and Hess for Marc Eychenne’s “Cantilène et Danse.”
Although the idea of a piece that includes both violin and saxophone was off-putting, the execution was inspired and the result surprisingly pleasant.
All three instruments blended together well, and the saxophone lent the piece a certain jazzy quality while the violin kept it grounded, before giving in to the jazziness as well.
The penultimate piece was a brief bittersweet Nocturne by Lili Boulanger and its performance was another testament to the musical understanding between Hess and Moser.
The emotion that they were able both to convey and to elicit over the course of such a short piece was a testament to their skill and their treatment of the gentle, almost apologetic ending left the audience clinging expectantly for more.
The evening closed with an intriguing collaboration. Mark and Solveig Santillano of the dance department jointly choreographed a dance to accompany Moser and Hess’s performance of Maurice Ravel’s “Tzigane,” and while the skill of the dancers and choreographers is not in question, it was a shame that when one tried to listen to the music the dancers distracted and when one tried to watch the dancers, the music distracted.
All in all, “A French Soireé” afforded an evening of musical virtuosity and joie de vivre.