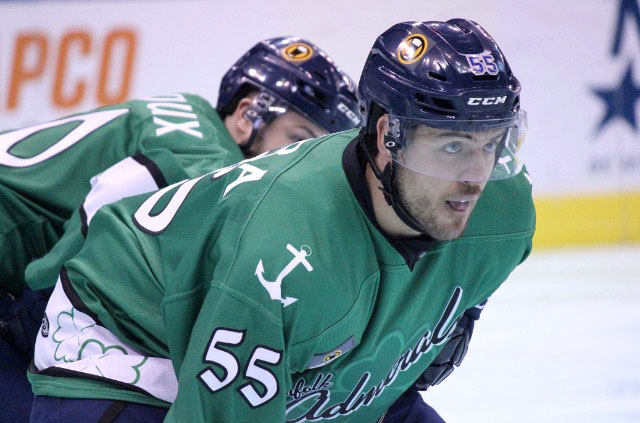 Mercyhurst senior Kyle Dutra has signed a Standard Player Contract with the Norfolk Admirals of the East Coast Hockey League. The Norfolk Admirals are affiliates of the Edmonton Oilers of the National Hockey League and the Bakersfield Condors of the American Hockey League. The Admirals have 10 games left in the regular season.
“It was a great opportunity that presented itself after the season,” Dutra said.
Dutra, a native of Mississauga, Ontario, scored six goals and tallied 11 assists for 17 points through 39 games this season. Three of his goals were on the power play and he blocked 39 shots in the defensive zone. Dutra held a five-game point streak in which he scored fours goals and picked up two assists.
Throughout his college career, Dutra played in 147 games while recording 31 goals and 40 assists for 71 points. He served as one of the team’s alternate captains during both the 2015-16 and 2016-17 seasons.
During his freshman season, Dutra led all Mercyhurst freshmen in goals (7), assists (15) and points with 22 and led all Mercyhurst forwards with 34 blocked shots. He had two, 2-point games and tallied two game-winning goals during his sophomore year. During his junior year he had four, 2-points games and tallied one shorthanded goal.
Dutra has played two games with the Admirals against the Reading Royals on March 17 and March 18. He scored his first professional goal on Saturday night which was the game-winning goal.
“It was a surreal experience playing in my first pro game, but I had a blast,” said Dutra. “College hockey really prepared me for the next level.”
Dutra will be joining six Mercyhurst alumni in the ECHL: Allen American’s Randy Cure ’14, Atlanta Gladiators’ Daniel Bahntge ’15 and Tyler Shiplo ’15, Rapid City Rush’s Ryan Misiak ’15 and Anthony Mastrodicasa ’16, and South Carolina Stingrays’ Adam Carlson ’16.