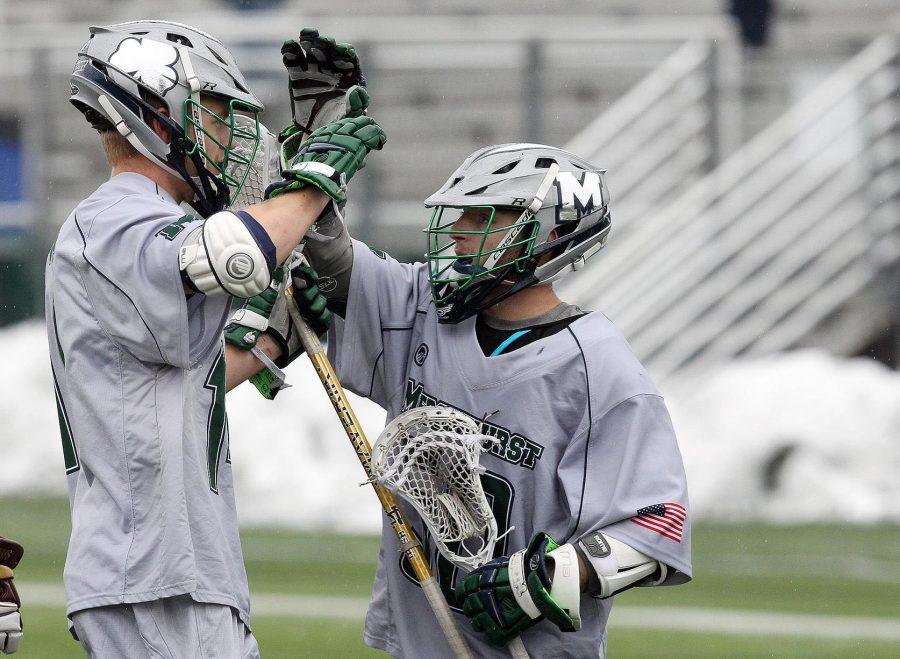 Senior Derek Richards had four goals and one assist against Walsh University on March 18.

Nearly 1,000 people packed into a wet and rainy Tullio Field for a 15-5 victory over Walsh University on March 18.
Mercyhurst’s squad has now won nine of the last 10 conference games dating back to last season.
“We were just staying confident with what we were doing…but we stuck to our gameplan that we normally do, and it worked out, and we came away with a nice win,” commented attackman Derek Richards.
After Kurtis Woodland opened the scoring just 1:19 into the contest, Bryan Crim sandwiched a John Plaskey tally 4:04 apart to even the quarter at two, leaving the door open for Benjamin Suchomma to defeat Matt Wells unassisted with seven seconds remaining on the first-quarter clock.
Wells’ defense pitched a shutout in the second and used goals from three players to take a 6-3 lead into the half. Richards broke the ice 1:21 into the second, and Sam Crusha picked up his third of the season just 50 seconds later after Joe Cerio picked up his second of eight faceoff wins as part of a 16-8 draw-control advantage for the contest. James Crowe was next to join the box score, finishing off a run of three goals in 2:05.
It wouldn’t be until the 12:55 mark of the quarter that Richards found a loose ball and sent it past Dylan Ciolino three seconds later for his 11th goal of the season.
The two sides then traded faceoff wins goals at the start of the third, but another win from Cerio at the draw control led to a ground ball for Brandon May, and Plaskey found his second of the game at 4:49 of the third. Wells’ defensive line caused four turnovers in the ensuing 6:27, before an offside call against Alex Svarch’s squad led to the Lakers’ first of two power-play conversions at 12:56.
Just 1:49 later, Oran Horn found a grounder and found McQueen as he picked up his second straight assist on Woodland’s second goal of the contest with 7.4 left in the third.
“We knew we could be them, we were beating them in the first half [but]…weren’t scoring goals, and in the second half we started putting the ball high…and started shooting high and started scoring,” commented Richards.
Meanwhile, the Cavaliers fell victim to Ciolino’s butterfly and more similar deficits in the fourth, seeing two more of 16 turnovers in the first 3:34 of the fourth, the first of which led to the Lakers’ fourth straight goal, this one at 3:21 as Woodland finished up his hat-trick after the shot beforehand went wide 13 seconds later.
After Colin Greenway caused a turnover at 1:32 off the Cavaliers’ Bryan Heisler, Joseph Plaskey found a grounder a minute later to finish off a clear for the Lakers, one of four in the quarter and 12 on the contest.
Horn picked up the power-play goal 25 seconds later for the Lakers’ fifth goal in a row. Richards finished up the run 53 seconds later to finish up his hat-trick.
The Cavaliers came within five seconds of their second power-play conversion of the contest, as Zach Macaluso found the loose ball and beat Wells at 8:04. The signs of life were short lived as Crowe recorded the Lakers’ third hat-trick of the contest at 9:30, and Richards found his fourth with 1:57 left.
The Lakers return to action next on March 25, as the Lakers head to Greensburg for a 1 p.m. draw with 11th-ranked Seton Hill.