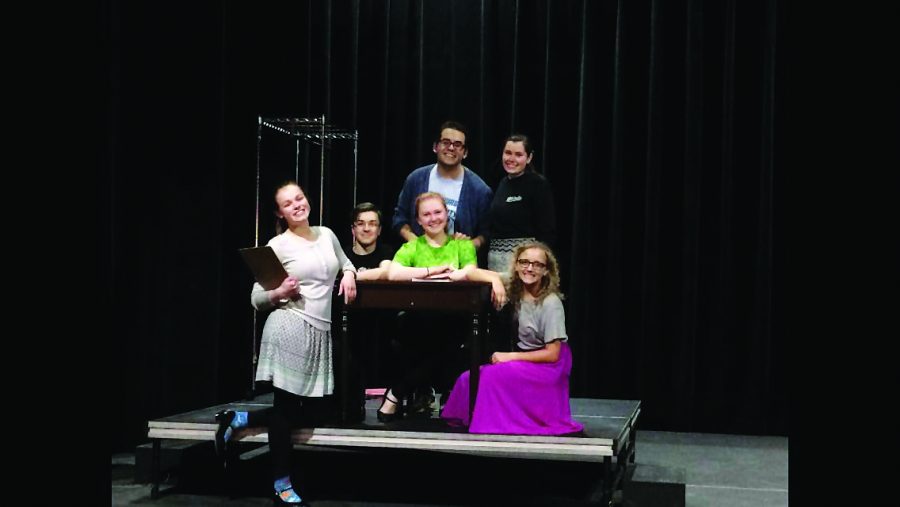 The Mercyhurst Theatre Program is known for putting on fantastic productions that showcase the unique talents and dedication of its students.
This year, Brett Johnson, Ph.D., head of the Theatre program, chose Michael Rowe, senior Intelligence major, as student director to put on a play called “The Miss Firecracker Contest.”
This is the second year Mercyhurst has done a student–led production.
Last year, nearly 30 students were involved in the department’s One-Act Festival.
Rowe directed his first short play there called “’Dentity Crisis” by Christopher Durang. After the huge success of last year’s showcase, the program wanted to continue that slot every year.
“The Theatre Program has grown to the size to support things like this,” said  Johnson. “We have so many students who are auditioning who want practical experience.”
“The Miss Firecracker Contest” is a play by Beth Henley that tells the story of Carnell Scott, an orphan living in Brookhaven, Mississippi.
She is determined to rid herself of her tarnished past by entering and winning the title of “Miss Hot Tamale” in the town’s Miss Firecracker Contest.
Johnson describes its genre as a show of “Southern Gothic absurdism meets melodrama, meets broad comedy.”
Johnson chose this play for the students and still is ultimately overseeing the production of this show.
“Henley’s play is really focused on character and posed a real challenge for the cast, not only to develop dynamic characters, but to really understand the crazy world of this play,” said Johnson.
“I thought it would challenge not only our student director, but all of our student cast.”
The transition from actor to director came as a bit of a challenge to Rowe as he stepped out of his comfort zone to direct a full-length show.
He took on the show with optimism and gratitude for the mentorship and guidance of Johnson.
“I knew that all I had to do was rely on what I have been taught and I would be fine,” said Rowe.
“I have been mentored through this process by the director of the Mercyhurst Theatre Program, Dr. Brett D. Johnson, and his advice has been invaluable. “He has helped guide me through this process and what it takes to successfully direct a show.”
This cast is unique because there is also a student set designer, stage manager, backstage crew and Bethany Sulecki, senior Music Education major, as student dramaturg.
“It’s really encouraging and fulfilling to see our upper class theatre minors who have fulfilled the coursework and have gained the resume take a leadership role,” Johnson said.
Sulecki’s role involved collecting research about the play itself, its author, time period and help the actors, directors and crew achieve that world on stage.
“It gives them an idea on where these characters come from, what they are like and what influenced Henley while she was writing the play,”  Sulecki said.
“The director, Michael Rowe, and I also worked on analyzing the script together to discover the themes and the message of ‘The Miss Firecracker Contest.’”
Both Rowe and Sulecki have been involved in every Mercyhurst production in some capacity since they were freshmen.
Their involvement has helped them gain invaluable experience as they saw growth and improvement within the close-knit cast and their own abilities.
“I feel like once you have been acting in enough productions and learning the material, you start to develop an instinct for directing,” said Rowe.
“You start to figure out what stage pictures look nice, the different tactics used to convey tension or oppression and how to put everything together.”
“As a senior,” said Sulecki, “I think the most rewarding and exciting thing about being in the Theatre (Program) is watching my peers grow as artists and people.”
The process of putting on a show comes with great reward for the director, especially as they see the entire production come together.
“It is very rewarding seeing the characters and quality of the show grow throughout the process. It means I did something right,” said Rowe.
“These actors respect the process and are fully committed to helping me create a great show.”
Johnson said he is extremely proud of Rowe, Sulecki and the entire student-led cast of the “Miss Firecracker Contest.”
“It is really exciting to see Michael find his voice as a director and having myself simply facilitate that process instead of doing it for him,” said Johnson. “The best way to learn is by doing.”
“The Miss Firecracker Contest” will be presented in the Taylor Little Theatre on April 6, 7 and 8, at 7:30 p.m. and April 8 and 9, at 2 p.m. Tickets are $10 for adults, $7 for seniors and students and $5 for Mercyhurst students and youth.