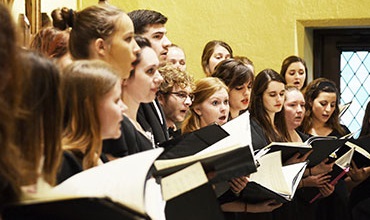 The Mercyhurst Concert Choir will perform in the Performing Arts Center this Sunday at 4 p.m.

The Mercyhurst Music Department is proud to present the Mercyhurst University Concert Choir.
Directed by the talented Rebecca Ryan, director of the Sullivan Conservatory and director of Choirs, the concert features pieces from “Mass in D” by Antonin Dvorak and “Lux Aeterna” by Morten Lauridsen.
In the spirit of the upcoming Easter season, it is natural that the choir should open with a requiem.
The “Faure Requiem,” a shortened version of the full Mass, was written by Gabriel Faure in 1887.
A requiem is a musical composition used in a Mass (especially in the Roman Catholic Church) for the repose of the souls of the dead.
Ryan explains that it is appropriate for a requiem to be sang before Easter, which is “right around the corner.”  Ryan chose the piece not only to honor tradition, but also for its “beautiful and hopeful message through memorable melodies and elegant harmonic progressions.”
Ryan selected “Lux Aeterna” as a contrast to the Requiem in that its “emphasis textually is on ‘light’ as it pertains to many aspects of our lives based on Sacred Latin texts.”
Lauridsen composed the piece in 1997, following the death of his mother who he considered the “muse” that introduced him to music.
Coincidentally, the “Faure Requiem” was also written after Faure’s mother’s death.  While Faure insisted that his Requiem was written for fun, Ryan says many believe that the loss of their mothers influenced the resulting works.
Given that possibility, one may hear the works as an example of contrasting responses to death and the grief that follows.
The “Faure Requiem” includes the famous soprano solo entitled “Pie Jesu,” which will be performed by senior Voice Performance major Victoria McIlvain.
The piece will also feature junior Voice Performance major Jake Shearer in the demanding Baritone solos.  “Lux Aeterna” contains multiple a cappella sections that “come out of nowhere,” thereby highlighting the choir’s vocal expertise.
The Concert Choir will be accompanied by a chamber orchestra and directed by Ryan.
The performance will be in the Mary D’Angelo Performing Arts Center on April 2 at 4 p.m.
General admission is $5 and $2 for students, faculty and children 12 and under.