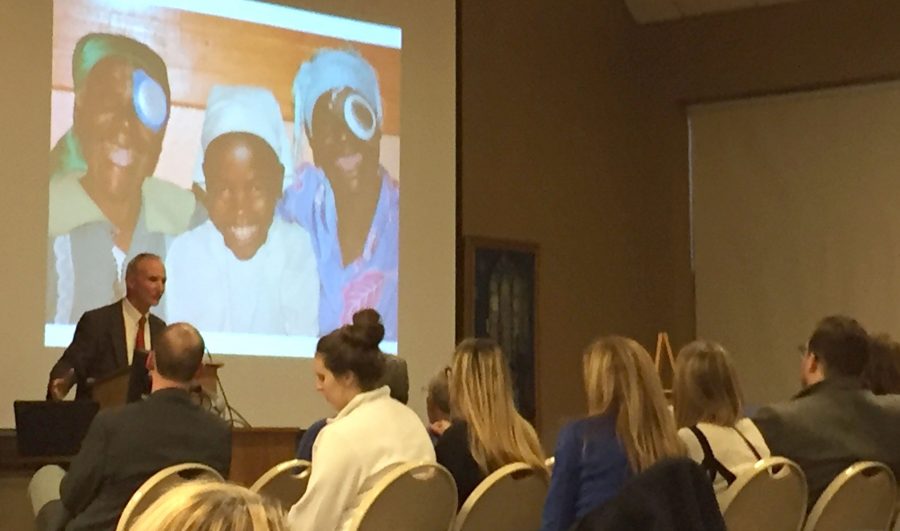 The Mercyhurst community was proud to award Doug Villella, O.D., with this year’s Archbishop Oscar Romero Award on March 23, for his work with the poor of Latin America. This is the 36th year that the award, which seeks to honor those in the Erie community who have exemplified the Mercy tradition, has been presented by the Religious Studies department.

“This award is a way for us to enact the Mercy core values and mission through the recognition of the people in our community who are doing these amazing works,” said Robert von Thaden, Ph.D., chair of the Religious Studies Department. “We honor people we see in the community or in the world living out a call of social justice.”

The Romero Award is named after the Salvadoran Archbishop Oscar Romero, who was assassinated in 1980 due to his dedication to the poor of the country. After spending time with the most impoverished citizens of El Salvador, he was inspired to give all he could to protect and aid the less fortunate. This service is now known as “preferential treatment for the poor,” meaning that it is one’s duty to use what means they possess to help the poor and vulnerable.

This year’s recipient, Villella, exemplifies the model of service put forth by Romero. Villella is an optometrist in the Erie area who founded “Vision for the Poor” — a sustainable eye care clinic for underdeveloped nations. He was appreciative of the honor and hopes this will help support the cause to end poverty in developing nations.

“If you ask me, it makes no qualitative difference whether the physical healing of blindness comes from a miracle performed by Jesus or by a compassionate eye doctor in Guatemala,” said Villella on Thursday evening. “In the end, we are all called to bring light into the world.”

During his lecture, Villella talked about first experience in Guatemala that changed his life forever. He and several colleagues traveled there in 1994 to help provide eye care to the community. During the week, an old campesino man came to his clinic in serious need of eye surgery. It broke Villella’s heart to tell the man that he could not help him because he and his team were not equipped to perform such a task due to their short stay.

“This blind man made the problem of suffering personal for me,” Villella said during the lecture. “Was it ethical to give sight to some and not others?”

He mentioned a “dark side” to mission work in the fact that often missionaries go to poor countries to help, but only for a few weeks. When the missionaries return to their home countries, the poor nation is still in need of more help all other weeks of the year as well.

“This message isn’t to dismiss those who go on mission trips and give what they can; every bit helps,” said Von Thaden. “The thing that his kind of setup does is makes it less about charity and facilitating people, but gives them tools to help their communities.”

Since that trip, Villella has dedicated his life to tackling the issue of eye care in poor countries by giving the people there the ability to have sustainable eye care. With the help of many colleagues, benefactors and primarily his faith and trust in God, he founded Visualiza care clinic in Guatemala. Today, the clinic provides 30 percent of the nation’s eye care.

“Vision for the Poor” is only continuing to grow through the support of others. Villella is very thankful for some of the unexpected help the organization has received over the years, including in a grant writing, and funding. “Vision for the Poor” has helped to build nine eye care hospitals in Guatemala, Haití, Nicaragua, Peru and Mexico.

von Thaden said he is proud to have the Romero award recipient be someone so close to the Erie community.

“People do amazing stuff here, and most of them are just doing it quietly,” said von Thaden. “It is nice to see someone doing such exemplary things that many people know within the community.”