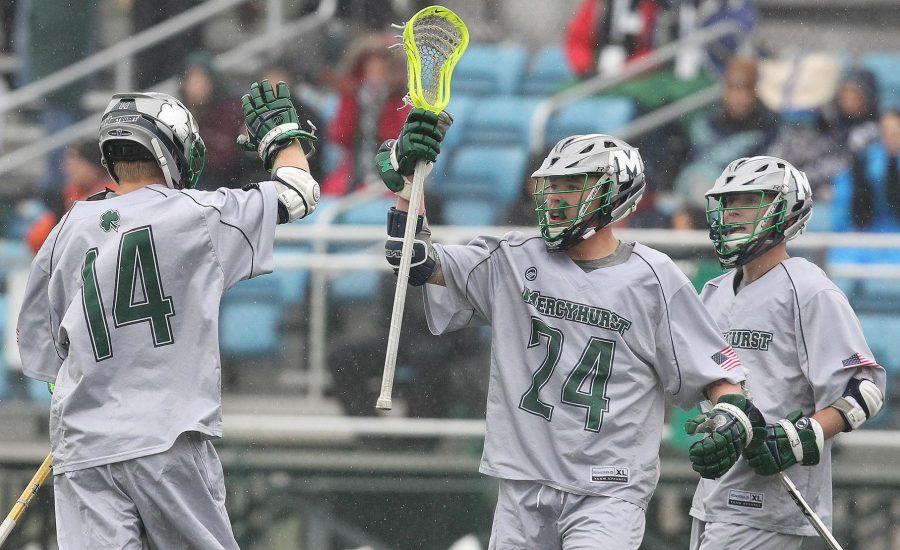 On March 25, the Mercyhurst men’s lacrosse team beat the Seton Hill University Griffins, 11-7, at Dick’s Field.
“I was very excited for this game,” said junior defender Greg Weyl. “They are one of our rivals and it is always a big game. This also means that we need to come into the game prepared and ready to win.”
Weyl had five ground balls and one caused turnover on defense in addition to one goal that he scored.
The Griffins held the lead in the first quarter of the game, 2-1. Laker senior attacker James Crowe scored at the 3:55 mark after the Griffins’ initial score. Sophomore midfielder Kurtis Woodland picked up the assist.
The second quarter saw a 3-3 split in the scoring allocation. Laker scoring for the quarter came from sophomore midfielder Jarrett Cook at 11:20 in the quarter assisted by senior long-stick midfielder Michael Poe, Weyl at 8:12 and senior attacker Derek Richards within the final seconds of the quarter with only 0:03 remaining.
From Richards’ goal, and into almost midway through the fourth, the Lakers faced no answer from the Griffins, scoring seven straight goals.
This rally led to a 10-5 lead that put the Lakers up on the Griffins for the remainder of the game. Junior attacker Colin Greenway put one in at 6:36 in the third, and was followed by Richards again via senior attacker Keyan McQueen with 4:25 remaining. Greenway scored another with 1:47 left with an assist from junior attack Oran Horn.
Fourth quarter scoring started off with McQueen putting one in at 13:09. Crowe then had another at 11:08 and McQueen at 8:39 again to top off the streak. McQueen also would score once more with 1:47 remaining in between the Griffins’ final two goals. The Griffins’ last goal came at the 1:11 mark to make the final score 11-7.
Statistically, the Lakers were over the Griffins in several categories. The Lakers outshot the Griffins 19 to 13 on-goal. The Lakers beat the Griffins in turnovers (18 to 10) and ground balls (24 to 19). Face-offs and saves were categories where the Griffins had the edge, with 13 won compared to nine for the former and eight compared to six for the latter.
Laker graduate student Matt Wells had six saves versus seven allowed at goal. The Lakers outshot the Griffins 34 to 25. McQueen led the scoring with three goals.McQueen was followed by Greenway, Crowe and Richards for two. Weyl and Cook each had individual goals on the board to round out scoring for the Lakers.
The Griffin game marks the midway point for the Lakers’ 13-game regular season. The Lakers are 6-1 and are at the top of the seven-school Greater Midwest Atlantic Conference at 3-0.
The Griffins are now 3-3 for the season and are 1-1 in the conference. They come in ranked as number three for G-MAC.
Second place is held by Lake Erie College of Ohio, who is 1-0 in G-MAC and 2-4 for the overall season. Lake Erie is the only other team other than the Lakers that have a positive conference record. On April 9, the Lakers will be traveling to Ashland, Virginia, against Wingate University.