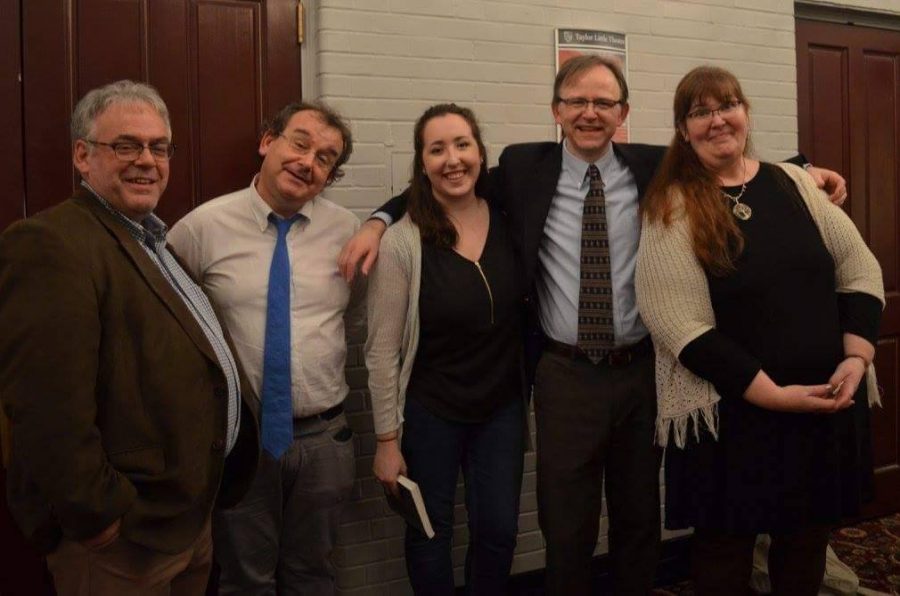 Mercyhurst’s annual Literary Festival continued this past week with an appearance by well-known Irish author Eibhear Walshe to read portions of his work on March 30 in Taylor Little Theater.
Walshe was born in Waterford, Ireland, and he currently lives in Cork, Ireland, where he is a author and lecturer at University College Cork. He has published many works including memoirs, literary criticisms and biographies.
Walshe’s first novel, “The Diary of Mary Travers,” the work he shared at Mercyhurst, is a work of historical fiction, published in 2015. It was nominated for the International IMPAC Dublin Literary Award and the Kerry Group Novel of the Year.

His unique and imaginative book takes place in 1895, London, where the famous Oscar Wilde is on a train facing his libel case, ruin, public disgrace and imprisonment. Mary Travers is following Wilde in the newspapers, and has a hidden connection between Wilde and his well-known parents. She dreads her disclosure and is sure to be discovered. The novel describes the controversial case, but through the eyes of Travers, where she reveals her unhappy life and mysterious intimate connection with two famous writers: William Wilde and Jane Wilde.

Walshe came to Mercyhurst to share his incredible work by recommendation of one of Mercyhurst’s own students after her study abroad trip to Ireland. She says that when she met him she was so impressed that she knew he would be a great addition to this year’s Literary Fest.

Walshe read some brief portions of his book, as to not give away the ending, but to give insight into the novel’s plot. Afterward, he welcomed any questions and comments from audience members. Walshe spent nearly a year finding the research he needed for his book, but then put all of it aside for a while.

“I did not want it to turn into a history book, so I put all of my research away and tried to imagine that characters’ voices,” Walshe said.

Writing this book not only took Walshe’s imagination, but it took his own story and the facts from his research as well. This was an extremly large part of writing this book.

“Because it is someone else’s story, you can tell a lot of your own story,” Walshe said.

When asked if he liked the real-life characters that he created in his own mind, he responded with, “Yes, it is as if they are all as real as if we had met just a minute ago.”

Walshe is currently working on his third novel and said that when he gets a spare two or three years he is looking to write a biography. Mercyhurst hopes to see more of his work in the near future.

Be sure to look for the last event of this year’s Literary Fest on April 20, where Lumen, the student created journal, will be unveiled.