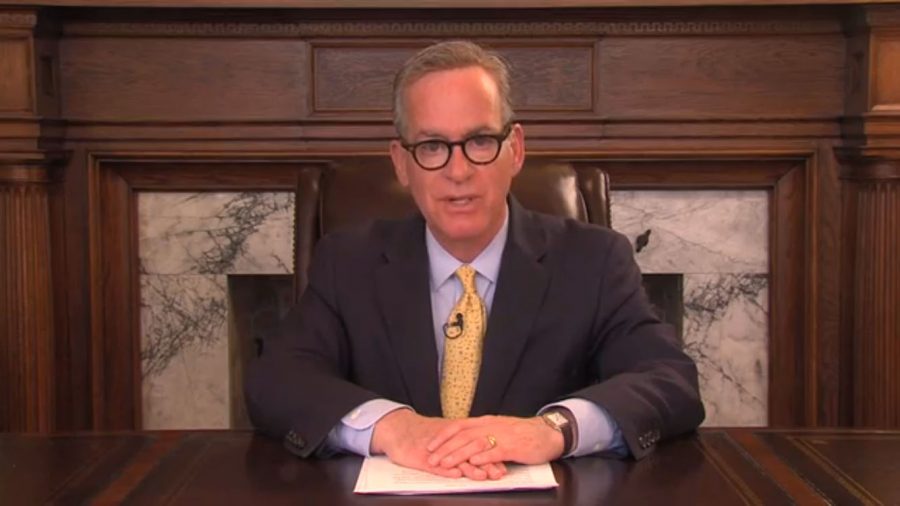 The Sisters of Mercy and Mercyhurst University strive to uphold the values of hospitality, inclusion and social justice. These values define our campus and are only going to be strengthened by President Michael T. Victor’s Diversity and Inclusion Initiative released on March 27.

Victor sent a video to the entire student body and all employees, introducing the new task force and outlining his staff’s latest initiative. The goal of the task force is improving diversity and inclusion on campus. This initiative comes in light of various incidents on Mercyhurst’s campus regarding racism and misunderstanding for the diversity within the student body.
“The incident in November shocked me because I never expected it from our students,” said Victor. “I wanted to see just how pervasive this was.”

The university used this unfortunate and saddening experience to launch a campaign to hear the voices of the students to see if other issues of racism were happening.

“I don’t think racism is a big issue here, but if it is an issue at all, I want it to be addressed,” Victor said.

The results of the listening tour led the task force to reevaluate issues they thought they knew about the school and the ways they were being handled.

“Who we said we were was not exactly the type of environment that we were,” Scott Michel, Ph.D., instructor of Althetic training, said.

The Sisters of Mercy’s core values are to promote social justice and a welcoming spirit. These values are ones the university wants to foster and continually improve in academics, extracurriculars and all around campus life.
“We’ve always been about mercy and social justice and we are ambassadors of that spirit. That’s what that strategy is all about; it should permeate what we are about here,” Michel said.

The task force began meeting in November to enact a listening tour that would focus on areas of concern among certain groups of students. The inclusion of diversity is not only racial, but seeks to welcome and understand sexual orientation, different cultural and ethnic backgrounds.

“We realized that things needed to be talked about and we needed to hear them,” said Michel. “We sat down and had that conversation. The more we heard, the more we realized we needed to reach out to other groups on campus as well.”

With the wide range of diversity on campus, the team does not want to make any generalizations regarding the student body.

“Mercyhurst is a microcosm of the world,” said Michel. “We have representatives on this campus from all walks of life. The problem is that I don’t think we are at the point of understanding each person for who they really are. That is something we need to work on.”

The listening tour was a way for the task force and the administration to directly hear how students were feeling about acceptance.

“We talked to several different groups directly so we wouldn’t be making assumptions about what was going on,” said Laura Zirkle, Ph.D., vice president of Student Life. “We are really listening to students about their experience at Mercyhurst.”

Four major areas of concern came up as common themes through these tours, so these became the four initiatives or “charges” led by faculty from various parts of campus.

“The creation of this task force is a call-to-action,” said Alice Agnew, Title IX coordinator. “The committees are tasked with determining the specific and real steps to address the concerns that have been shared and to bring about change.”

Charge One, led by Agnew, states that it is meant to “develop employee awareness and training in cultural sensitivity skills.” This charge is more all-encompassing as it strives to bring about cultural awareness and understanding throughout campus.

“The goal is that every person on campus will become more responsive and understanding in day-to-day interactions with others at Mercyhurst who are not the same race or who are from different ethnic or cultural backgrounds,” Agnew said.

Cariel Lewis, assistant director of Residence Life and Student Conduct, is leading Charge Two: “to enhance hiring practices in recruiting people of different racial and cultural backgrounds.”
“We want to make sure that people of color see people like themselves represented in our faculty and staff,” said Victor. “We plan to double down our efforts to recruit qualified faculty and staff who are diverse.”

Another result that came as a shock to the administration was the lack of resources to deal with some of the students’ major concerns about diversity.

“When our team of experienced faculty realized that we wouldn’t have known where to go with these issues as students, clearly, we realized we had an issue,” said Zirkle.

Charge Three, led by Zirkle, aims to tackle this issue directly by “implementing a mechanism for reporting incidents of concern.” There are often smaller concerns that go unreported because there are not specific offices that people can go to. Zirkle’s area of focus wants to allow students to easily bring up any issues regarding inequality, discrimination, or could possibly be offensive to another student.

“There’s an ease of access to it, even if it is a small issue that just wants to be brought to our attention,” said Zirkle.

Lastly, Charge Four aims “to build an inclusive campus environment.” Michel and Sarah Allen, director of Campus Involvement Center, will be heading up the last task force as co-chairs.

“Our charge touches on a little of the other three and is more multifaceted,” said Michel. “We want to educate and promote cultural competence on campus and put a really intentional focus on development.”

From the listening tour, students and faculty came up with many ideas about how to increase this cultural competence such as implementing more classes on diverse topics. Some ideas that were shared were for more immersion experiences, iMU curriculum on diversity, classes in Caribbean and African literature and more experiences in extracurricular that would tear down the boundaries of privilege. These ideas fall under the category of Charge Four as it brings together the holistic campus experiences.

Every task force utilizes the unique skills of the leaders of various departments as they use their professional position to guide others along this process.

“It is important to have various areas of student life involved because that is the way we all will get and share ideas on ways to make Mercyhurst a great place to learn and work,” Lewis said.
Not only will the faculty use their professional positions to impact the charges, but their personal values and passion for the project.

“As for my position, honestly, this is just an opportunity for me to do what I am passionate about, said Michel. “When you have the opportunity to do something that aligns with your passion you should. I choose to grow and push the boundaries of things because I think there are amazing things waiting on the other side.”

Although these charges are committees led by dedicated and specific faculty, Victor and all those involved want to emphasize the need for the entire campus to be aware, get involved and continue to give their ideas and thoughts.

“As it relates to Diversity and Inclusion, there are major differences between having a seat at the table, having a voice at the table and being seen at the table,” said Lewis. “All I can say is Mercyhurst is about to serve a delicious meal prepared and contributed by all in attendance.”

Zirkle stresses that we ask that people are patient with the process, but that we hope to see some small changes happening rapidly.

“We are changing culture. This won’t happen overnight, but we are committed to making it happen,” said Zirkle. “If there was a quick fix, it would be easy to do. In order to effect culture, there has to be a long term change.”

This initiative is a continual effort to improve the university and its environment. All those involved want to see the Mercy mission continue through constant reevaluations and improvements.

These topics may bring about some controversy, but the dedication of the students, faculty, and staff and respect for the changes implemented will bring about the greatest benefit for the school.

“It will take work and is definitely going to be tough, but if we lead with love, we will win,” said Michel. “Love always wins.”