It is story time at the Cummings Art Gallery 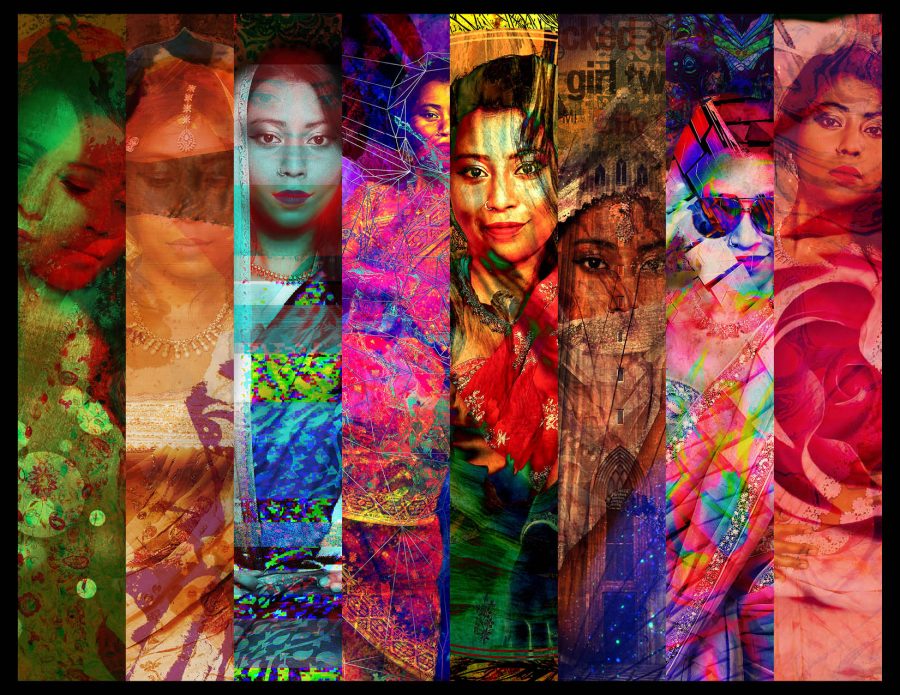 A collage of the works from Mahmud’s “I am a Woman” series.

From April 5, through May 4, the Cummings Art Gallery will be displaying the “Story Telling” Senior Thesis Art Exhibit, which features works by seniors Jeff Annunziata, Kelly Fergus, Meagan Gross, Eva Kocieniewski, Sabiha Mahmud Sumi, Rachel Mergenthaler and Shannon Abernathy.
There will be a reception with the artists on Saturday, from 2 to 4 p.m., which will be free and open to the public.
Kocieniewski, an Art Therapy major with a Psychology minor, jokes that her pieces have short names like “Overgrown” and “Folklore” because she’s “really bad at naming paintings.”
Her pieces are listed as “mixed media” and use a myriad of materials, including acrylics, India ink, metallic inks, collage and pressed flowers and a caulking gun.
This was a challenge for Kocieniewski, who is used to working on projects on a smaller scale and with fewer materials.
She chose to leave her comfort zone for this project, however, because she felt it was important to challenge herself.
This series draws inspiration from nature. “I have always been inspired by nature and all of my work is nature–related. I like the contrast and the relationship of the grotesque and beautiful,” Kocieniewski said.
However, while Kocieniewski draws inspiration from nature, there is no set theme to her artwork. “I didn’t want to really be restricted by trying to portray a theme or story, so I worked entirely out of experimentation and exploration and themes developed on their own,” Kocieniewski said.
The result is a deeply personal series of incredibly detailed paintings.
Kocieniewski has been accepted into the graduate program at Nazareth College in Rochester, New York, for Art Therapy.
Graphic Design major Mahmud’s series translates to “I am a Woman.”
The artist explains that Bangla translations of the word “woman” are all associated with cultural roles for women. The eight digital archival canvas prints that make up the series “challenge these preconceived roles that revolve around a woman’s marital status, and tell the story of each translation as it liberates itself from the role and embraces the identity of a woman.”
Each piece in the series is a colorful self-portrait of Mahmud, and each is entitled “not (your/a) x, I am a woman,” with x being a Bangla word that “woman” would translate to.
Mahmud rejects each word due to the negative connotations it brings.
“This series is an intellectual introspection into the established roles and statuses of womanhood embedded in the Bangladeshi culture and society,” Mahmud said.
Jeffrey Annunziata, a Graphic Design major, uses double exposure photography, a technique that involves superimposing two images to create one.
“Each piece tells you something about the person, about their story. It could be something that is dear to them or maybe even something they do that is a major part of their life,” Annunziata said.
Meagan Gross, who will be receiving a Post Baccalaureate Certification in Art Education from Mercyhurst, will have her multimedia piece “Once Upon A Time” displayed.
“The meaning behind my art piece is to show my love of storytelling. Storytelling is universal and important to all cultures around the world,” Gross wrote.
In fact, Gross drew her inspiration from fairytales and writes that she has “always been inspired by whimsical fairytales that whisked [her] off to new lands.”
“Once Upon A Time” uses 20 pages that Gross cut from books in a technique called “block poetry.”
Gross looks forward to opportunities like the art exhibit because she loves being able to share parts of herself with others.
The Cummings Art Gallery is open Monday through Friday from 9 a.m. to 4 p.m. and Saturday and Sunday from 2 to 5 p.m.