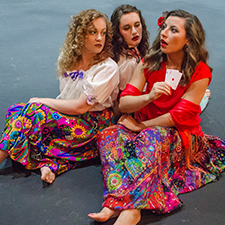 The Mary D’ Angelo Opera Workshop will present “Carmen” this month.
Written by Georges Bizet, it is a drama about a seductive gypsy, Carmen, as she deals with the business of the law and her heart.
It is based on an 1845 novella by French dramatist Prosper Mérimée.
The opera will be narrated in English but sang in French.
Louisa Jonason, assistant professor of Voice and director of the Opera Program at Mercyhurst, who is  leading the production, says it doesn’t matter if you don’t know French—once you hear the song, you will understand the theme.
“I tried to choose an opera based on the students I have in my opera workshop…you don’t do ‘Carmen’ unless you can cast ‘Carmen,’” Jonason said.
One needs a mezzo for “Carmen,” and according to Jonason, she found the perfect Carmen out of Christina Cacchione, who she says “has a fabulous voice.”
Don José, a love interest of Carmen’s who is played by alumnus Brandon Miller, ’16, has to be a dramatic tenor.
Jonason mentioned he is perfect for the role.
There are a total of seven leads, but those are the two who really need to be cast correctly.
Escamillo, who is played by Jared Hancock, ’16,  another alumnus, is a bullfighter and  another love interest of Carmen.
Jonason’s favorite thing about the opera is “the story of Carmen and the music.”
She mentions it is dance music, and that everyone will love the music even if they do not like opera.
When asked about her process, she said she “always tries to make the characters real so you can identify with them.  There is a little orchestra in the opera because it is important to the opera and it is very Spanish sounding,” Jonason said.
Cacchione, senior Voice Performance major, prepared for the role of Carmen by reading the novella.
“I watched all sorts of different productions of the opera and listened to many different recordings of the opera to fully understand the story and the music. The music of ‘Carmen’ is so captivating and has inspired so many audiences for decades,” Cacchione said.
Jeanette Fournier, junior Voice Performance major with a secondary concentration in Composition, is Mercédès, who is one of Carmen’s friends.
When asked how she prepared for the role, she stated, “Lots and lots of hours at the piano with my music, as well as hours with a French dictionary translating and practicing the text.”
She likes the music and notes that “just about every aria, duet or scene in this opera has wonderful, memorable music that gets stuck in your head and won’t leave.”
She notes that Jonason has a wonderful concept for this performance of “Carmen.”
“This performance is not fully staged, and all of the characters are present on stage in “tableaux” if they are not in a certain scene, and it’s a great dramatic choice,” Fournier said.
Victoria McIlvain, a senior Voice Performance major, plays Frasquita, Carmen’s other gypsy friend.
“I started with the language first by translating the words and going through the pronunciation. This allows me to know what action is going on, what I am saying, what the characters around me are saying, and what my character is like,” McIlvain said.
Lauren Ganger, a freshman double major in English and Music, is a soprano and plays Micaëla who grew up with Don José and takes care of his mother while he’s in the army and hopes to marry him.
She loves the music in the opera. “‘Carmen’ is a great opera to begin with if you’ve never been to an opera before. It has wonderful music and the plot is intense and exciting. I urge students to come if they can,” Ganger said.
“Carmen” will be in the Walker Recital Hall. The shows are on April 21, at 8 p.m. and on  April 23, at 2 p.m. Tickets are  $5 for general admission and $2 for Mercyhurst students with ID and faculty.