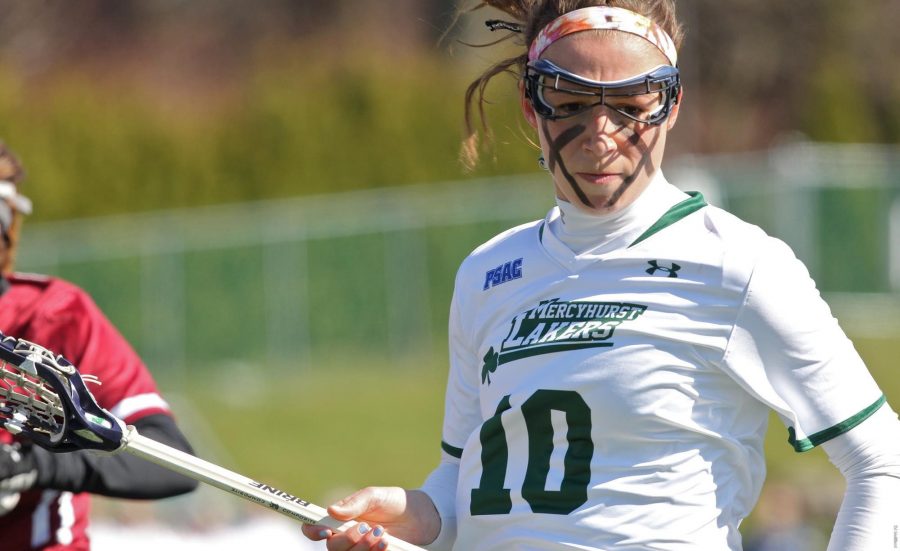 Senior Carly Zimmerman had six goals and two assists for eight points in the 21-16 win over Gannon that saw nine Lakers score at least one goal and 10 receive a point for their actions.

The Mercyhurst women’s lacrosse team defeated the Gannon University Golden Knights 21-16 in a March 29 game.
The two teams squared off at Tullio Field on a cold Thursday afternoon.
The first half was marked by multiple lead changes and concluded with an 8-8 tie. “I thought the game was a back and forth game,” said senior midfielder Carly Zimmerman. “We would go on a scoring run and they would come back.”
Zimmerman had six goals and two assists for eight points alongside five draw controls, three ground balls and two caused turnovers.
Starting the second half, however, the Lakers were able to put the Golden Knights away with an 8-1 scoring run that gave them a 16-9 lead within the first eight minutes of the half.
From here, the Golden Knights were hard pressed to recover from the deficit. The closest the Golden Knights would get to the Lakers’ lead for the rest of the game was within four goals, but they did not let off the pressure on the Lakers. “They didn’t give up,” said Laker Head Coach Kevin Cooke. “Even when the score was 19-12…they continued to battle back and kept our starters in the game a little longer than planned.”
The Golden Knights’ offensive performance was powered by two five-goal games out of Tessa Mitchell and Leilani King.
“It was a team win,” saidZimmerman. “In the game, nine different players scored and ten different people had a point. Eighteen different players got into the game and everyone contributed to that win in their own way.”
Zimmerman topped the scoring with her six goals, and was followed by senior Janelle Williams with five and junior Kristin Anderson with four. Junior Taylor Izzo, sophomores Angelina Simon and Catherine Meegan and freshman Lacey Netti, Brenna Fosco and Sydney Dubois all had one each to round out the Lakers’ scoring.
The Lakers and Golden Knights had a lot of parity when it came to game stats, but Cooke highlighted one area where the Lakers were able to dominate. He pointed out that the Lakers beat out the Golden Knights 22-17 in that category.
“Draw controls were extremely important to us… That’s obviously an important statistic because that’s the first possession of every single play,” said Cooke. “A lot is to be expected, the PSAC this year is very competitive top to bottom…Every game is important and every game has the potential to be close.”
The Lakers improved to 4-2 for the season and 2-1 in the PSAC. The next time they take to the field will be an April 1 away game against Kutztown University, on their Alumni Day.
Kutztown had previously had a come-from-behind win against the Golden Knights on March 25. They are currently 5-3.
“They play strong, they play aggressive,” said Cooke about his team’s next opponent. “You can’t take anybody lightly; if you do, you won’t have the end-of-season results that you are looking for.”