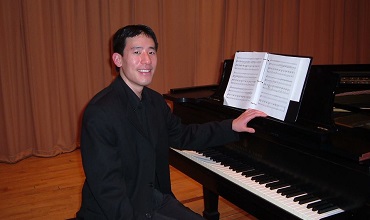 A performance by Gerald Lee, D.M.A., ended the 2016-17 season of the Roche Guest Artist Series.

On April 5, the Roche Guest Artist Series was given an auspicious conclusion by pianist Gerald Lee, D.M.A.
Lee had a delightful presence onstage.
He spoke to the audience conversationally before all three of his pieces, taking the time to discuss each thoroughly before sitting down to play.
The result was that the audience could listen to each piece with a better idea of what to expect—including, in one instance, when it would be appropriate to clap.
Lee’s playing was characterized by a heavy left hand and a masterful control of dynamics.
Lee began the evening’s performance with Robert Schumann’s Kreisleriana, Op. 16, a prodigious eight-movement work inspired by a character created by E.T.A. Hoffman.
The piece began with a movement that was fast, but not frantically so, which was followed by a contrasting movement that was slow but not laborious.
Confusing transitions between movements—including several intermezzi—made it hard to keep track of exactly where in the piece he was, but that seems to have been the composer’s point.
Hoffman’s character, Johannes Kreisler, is a character of contradictions and erraticism, and the almost frenzied contrasts of the piece do a nice job of putting that on display.
“Kreisleriana” was successful in that it showed the wide range of Lee’s abilities as an artist.
An animal ferocity present in one movement would give way to a regal stateliness; an excitingly fast movement would be followed by a slow, thoughtful one.
Each change in feeling was communicated as effectively as that which preceded it, giving the impression that Lee was capable of feeling deeply each movement’s mood.
After the intermission, Lee played Ludwig van Beethoven’s Sonata in E Major, Op. 109.
This piece began with a deceptively simple, but unaffectedly beautiful melody in the right hand that was repeated in variations in both hands throughout the movement.
There was a feeling of growing or reaching for a certain point throughout this movement.
It ended with a tonic chord played gently, making the beginning of the next movement—a marcato tonic chord—seem all the more jarring.
Despite this movement’s greater intensity, there was still a playfulness to it that was also present in the first movement.
The final movement, marked “Gesangvoll, mit innigster Empfindung,” which roughly translates to “songlike, with heartfelt feeling,” was the longest of the three movements.
It would be hard to try to describe this movement in one word: it began contemplatively, and then became rather excited, and then settled a little, allowing the pianist to pour forth his emotion.
The same joy that had flowed throughout the piece made a more prominent reappearance toward the end, and the piece ended with a simple, pensive coda.
The final piece was Chopin’s Ballade No. 4 in F Minor, Op. 52.
Once again Lee was able to treat each mood of the piece with the attention and care it deserved.
The calm beginning and sections dispersed throughout were respites of sorts from the intensity that took over and dominated the piece when it appeared. Lee seemed equally comfortable during these respites as during the intense parts.
Watching him during this piece in particular made it hard to tell who was in control, Lee or the music. At times he seemed to master it, at times he seemed to be its servant, and at times a perfect symbiosis was present, to the great advantage of both performer and music.
The concert seemed to have ended too soon and one can only hope that Lee will make a reappearance in the future.