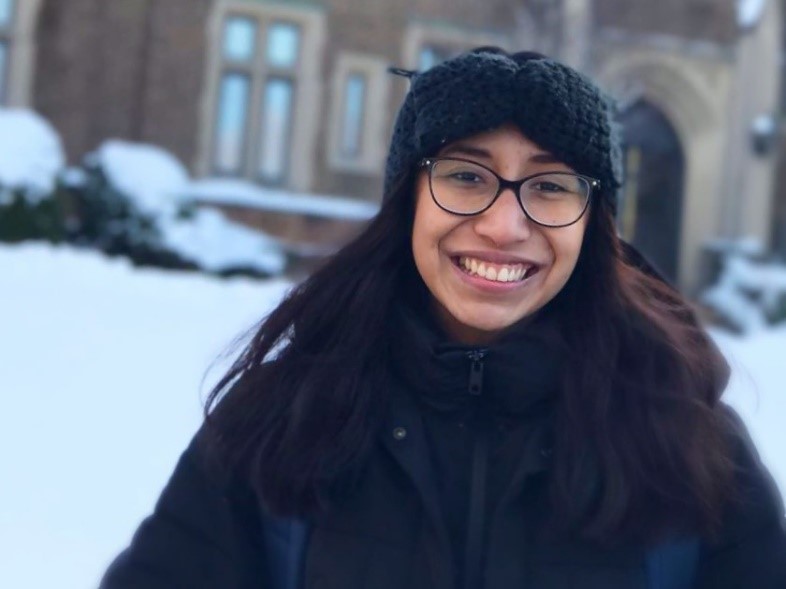 Dayana Moncada, who is from Honduras, is a senior double major in Fashion Merchandising and Political Science, concentrating in International Relations.

Dayana Moncada is a Honduran native and an international student of Mercyhurst University. She is currently a senior with a double major in Fashion Merchandising and Political Science and a concentration in International Relations.

“The United States is the land of opportunities. There are so many things available, you just have to search for them,” Moncada said. Moncada mentioned that the ability to try and be the best person you are is not available in all countries. Too often, students do not realize how much potential they have. Thus, she decided to make the best of her opportunity to study in the U.S.

“Honestly, Admissions’ system of recruiting got me to attend Mercyhurst. The recruiters came to my high school and I was interested,” Moncada said.

Indeed, Mercyhurst’s admissions department seems to be doing a good job in recruiting international students of various backgrounds to diversify our campus.

She shared her own thoughts on the concept of diversity,

“Diversity begins with you, embracing your uniqueness and acknowledging that you are special; not feeling ostracized because of your differences.” Moncada said.

She described diversity as a gray issue; it’s not black and white. We should be accepting of all differences in society while trying to understand people for who they are individually and on a more personal level.

She describes Mercyhurst as diverse in terms of a welcoming community. She suggests an orientation for international students where they could connect more with other students of diverse cultural backgrounds.

“Starting from freshman year would be beneficial because you can build friendships and get to know each other initially,” Moncada said.

Though there is a very active International Students Club, not everyone gets out there at the beginning of the year. Thus, an orientation session with students of international background could be a great start to many lasting friendships.

One positive highlight of Moncada’s time at Mercyhurst is the relationship with professors. Small class sizes help students to connect with their professors outside of the classroom.

“It is easy to build a relationship with your professor and if you need help, they are right there for you, which is something you are not able to do at a big school with 300 or more students in one class,” Moncada said.

She also mentioned that professors are very welcoming and always willing to help students because they genuinely want to see us become successful.

On the other hand, the snow was a surprise. In Honduras, it never snows and the temperature rarely falls below 65 Fahrenheit. Thus, Erie’s winters were the most shocking thing for Moncada.

Additionally, she mentioned the difference in cultural perception of self.

“It is completely different. In Honduras, people show importance to community and family. There is a sense of collectivism. Here, individualism triumphs and it’s all about you,” she said.

Moncada closed this interview with her plans for the future. After graduation, she intends to return to Central and Latin America to pursue a job in international development. Soon after, she wants to attend law school to study immigration law.