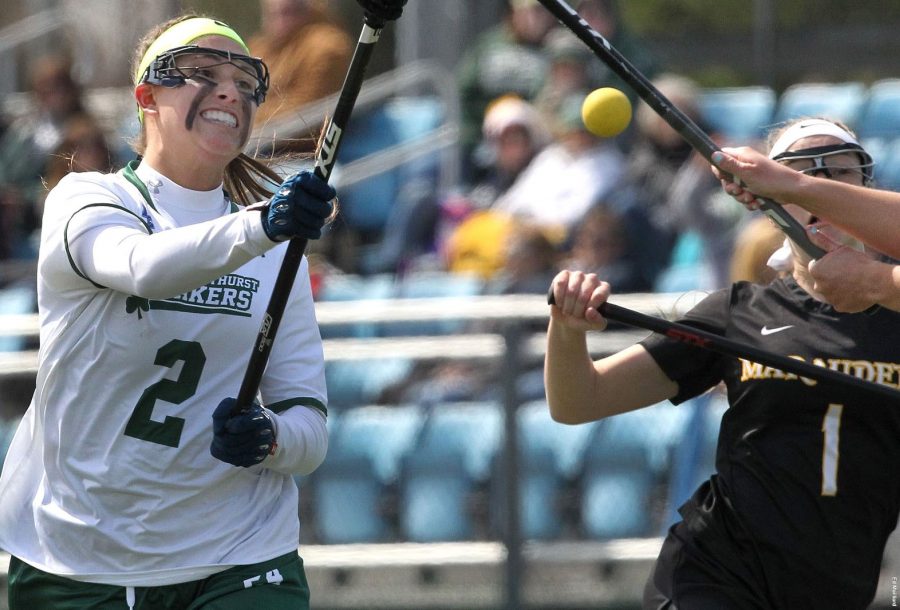 Junior Taylor Izzo struggles for the ball alongside players from East Stroudsburg University.

Something weird happened this past Saturday April 15 at a breezy Whitenight Field in East Stroudsburg. Did a near upset the previous Saturday set the stage for yet another upset in Kevin Cooke’s first season in his return as head coach of the women’s lacrosse program?
Ask yourself this: What problems could the No. 10 team in the country have when it is outscoring its opponents by more than 4.5 goals per game, winning all four of its major defensive metrics and has three players on pace to nearly replicate Rebecca Himes’ 2014 and 2015 campaigns?
A Nanuet, New York freshman recording 22 saves will not help, but the Lakers did put up 54 goals in their first four contests in April to improve to 8-3 overall, and now sit in a tie for second place in the PSAC at 6-2 after Saturday’s 16-10 defeat to the Warriors.
Leave it to the team’s leading point-scorer and assister in Taylor Izzo to describe the plan.
“When we got the ball down, we settled it down, we worked it; (attackers) were open, you just (have to) see it, (have to) thread the needle a little bit…but we (are) very composed and our heads (are)up.”
Going into Saturday, the Lakers had won six in a row.They returned home from an April 1 win in Kutztown that saw them split eight-goal halves against Edinboro.
With no major changes, Izzo noted the +7 advantage in draw controls and +8 in ground balls—that kept the Fighting Scots at bay.
“Together we worked hard to get those ground balls and…caused turnovers in the midfield, and that’s what really helped us get that ball back.”
The following day saw an eerily similar trajectory (no pun intended) to the previous day’s action, as visiting Millersville (6-7, 3-5 as of April 15) sent 9 of the 13 second-half goals past Gravino, but only two in the first half handed the Lakers a 13-11 victory.
However, what appeared to be inevitable occurred the following Saturday, as freshman Tatyana Petteway recorded 22 saves in improving her PSAC-leading save percentage to .557 and leading now-No. 17 East Stroudsburg (11-2, 6-1) to their sixth straight win and their first win over the Lakers in 12 years.
Emily Fitzsimmons broke the ice, followed by Izzo, who found Williams 39 seconds later. However it would be PSAC Player of the Week Emma Rufolo scoring at 3:16 to hand the Warriors a lead they would never relinquish. A 4-1 spurt only interrupted by Anderson sent Gravino to a 5-2 deficit when Cooke called time at 8:28 of the first, and Petteway helped her cause by stopping 12 of 14 free-position shots, including one on Zimmerman at 9:20 of the first that eventually led to Chessie Rahmer’s second of the game at 11:38.
After Zimmerman caught a pass from Lacey Netti to get the Lakers within three, Lauren Green found Rahmer with one of seven assists as the Warriors outscored the Lakers 7-2 over the final 23:38 of the first, including Rufolo’s second consecutive goal of the contest with 11 seconds remaining in the first.
The second half would prove no different, as three Warriors opened the half on a 5-1 run to open a 14-5 lead 11:26 into the second: two goals by Fitzsimmons and TJ Jefferis and an opener from Alicia Stratten at 1:47 that set the stage for a furious Laker rally.
After Jefferis finished off her hat-trick, Izzo was able to beat Petteway at 12:09, leading to a timeout, and again 1:13 later gave the Lakers a slight momentum boost, and after Kerry Mulcahy was booked at 17:02, Zimmeman converted on the power-play for her team-high 34th of the season at 18:15 before Anderson finished off a 4-0 run at 19:43.
Petteway was not to be outdone as she stopped free-position shots from each of the Lakers’ top four weapons, including three each on Williams and Zimmerman, seven of them coming after Fitzsimmons found her fourth of the game.
The Warriors finished off the contest after killing off a booking to Bethany Cunningham at 24:24 and Rahmer finding her fourth and fifth of the contest 2:08 apart—the second on the power-play on an Izzo booking—to bring her total to a team-high 32 and bookend a snap to the Lakers’ six-game winning streak.