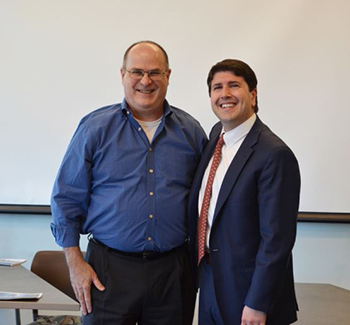 “Receiving the award in front of my students was a big surprise but entirely appropriate. It is easy to be a great teacher when you have great students,” Wheaton said.

“Before coming to Mercyhurst in 2003, I was in the Army for 20 years,” said Wheaton. “I spent most of my time in Europe working intelligence and intelligence related issues in the Balkans.”
Wheaton has come to be known for his unique style.

“I use games to teach all aspects of intelligence. Mostly I use a variety of commercial games that help teach or reinforce concepts I want my students to learn but, increasingly, I use games that I have designed for this purpose,” Wheaton said.

“Spymaster,” one of the games that Wheaton designed, is a card game that teaches the basics of managing diverse collection resources. Another, called “A Mind’s Lie,” is a tabletop game that helps students to identify cognitive biases.

He has even been interviewed by USA Today for teaching with games.

“I was also interviewed by the BBC regarding the Pokemon Go craze of last summer and Public Radio International regarding my re-boot of an old Viking game called hnefatafl,” said Wheaton.

Wheaton is also known for his success with his crowdfunding campaigns. In the past three years, 22 of 24 have been successful.

“Quickstarter is something that was born with my own experience with crowdfunding,” said Wheaton. “I was successful in funding the development of my first two commercial games using Kickstarter, one of the oldest rewards-based crowdfunding sites.”

He stated that he noticed that other creators in Erie were not having as much success, mostly because campaigns were poorly executed, not because their ideas were bad. He had the idea to use Mercyhurst students for Quickstarter to help the creators get their ideas going.

“Quickstarter is, at its core, my attempt to combine the skills of local college students with the passions of local creators in order to increase the odds of success crowdfunding new ideas,” Wheaton said.

Wheaton also has a popular blog, “Sources and Methods”, to share ideas with students, faculty and entrepreneurs.

Being nominated and chosen for this award is a high honor to Wheaton.

“There are many extraordinary teachers at Mercyhurst and to be considered to be among the best of them is both amazing and humbling,” Wheaton said.