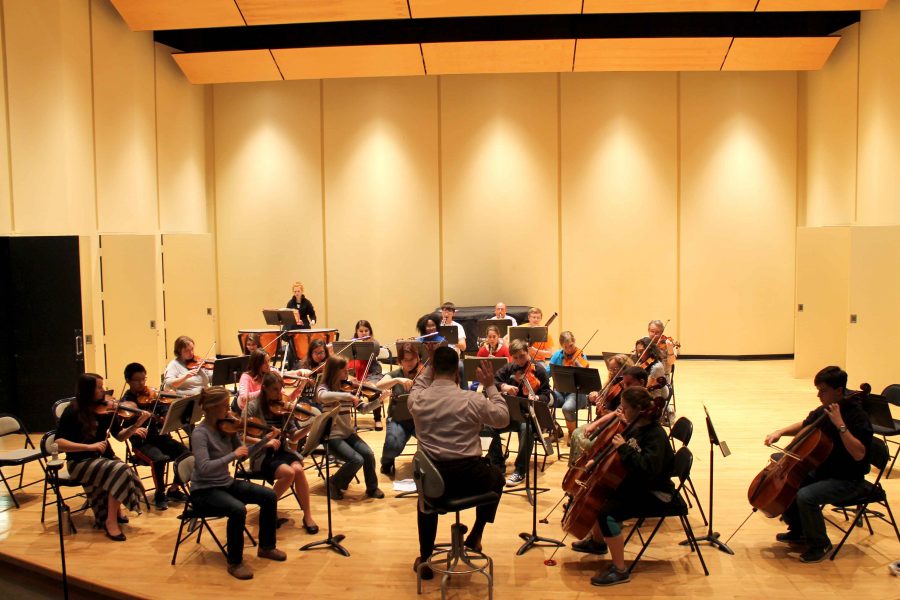 The newly named Mercyhurst Civic Orchestra under the baton of Jonathan Moser.

The D’Angelo Department of Music will present the Mercyhurst Civic Orchestra concert on May 7 at 4 p.m. in Walker Recital Hall.
The name of the orchestra will officially be changed from the Mercyhurst Chamber Orchestra to the Mercyhurst Civic Orchestra next semester.
The orchestra, under the baton of Jonathan Moser, visiting instructor of music, will perform a program featuring pieces by Ludwig van Beethoven, Richard Wagner, Benjamin Britten, Cecile Chaminade and Robert Schumann.
The concert’s soloists, Shelby Mayberry, Isaiah Howard and Deven Shah, were the winners of the Concerto/Aria Competition hosted in January.
Mayberry will perform two operatic arias for soprano, “The Embroidery Aria” from Britten’s Peter Grimes and “Dich teure halle” from Wagner’s Tannhäuser.
“The Embroidery Aria” is a famous piece that relays the great tragedy in the opera: the character, Ellen, had knitted a sweater for a young boy who had then disappeared, and the sweater’s reappearance on the beach provides the proof that the child had drowned.
It is an aria that reflects on the happy memory of the creation of the sweater, juxtaposed with the sad reality of the boy’s death.
“Dich teure halle,” like “The Embroidery Aria,” comes from a tragic opera.
It is sung by the character Elisabeth, who has heard that her beloved Tannhäuser will be returning to the Hall of Song, where he has won many singing competitions.
Elisabeth sings this aria as a joyous greeting to the Hall, but the hope of the aria is short-lived.
Howard will be the soloist in Chaminade’s Concertino for flute, one of the composer’s most well-known works.
As a child, Chaminade was thought of as a wunderkind both as a pianist and as a composer, and it was hoped that she would become a great composer in her adulthood.
Moser bemoans the fact that she never truly realized her composing potential.
This piece, originally written for piano and flute, was transcribed for a full orchestra, but the simplicity that made the piece beautiful in its original form is still present.
Shah, a highschooler, will perform the first movement of Beethoven’s first piano concerto.
The orchestra will play a work without soloists as well, Robert Schumann’s Symphony No. 4 in D minor, Op. 120.
The piece was written for the pianist and composer Clara Schumann, whom the composer had just married after a long struggle with her father.
Unfortunately, the piece achieved little success at its debut; it shared a program with pieces by the composer Liszt performed by Clara, who stole the show.
Moser laughs at the irony that the woman for whom the symphony was written ended up upstaging it by her own performance of different pieces.
The piece is notable for its form.
Moser explains that Schumann was firmly rooted in the beginning of the Romantic era, an era characterized by the stretching of the boundaries of form.
The symphony can be described as cyclical; the movements seem to flow into one another, and the themes outlined in the first movement reappear throughout the work.
In addition, while symphonies of the Classical era will have each movement “close,” the first movement of this work does not get its “closing” until the end of the final movement.
The work is also noteworthy because, while it is known as Schumann’s 4th, chronologically it was actually written second. Schumann abandoned it after its initial failure.
It was not until years later that he made revisions and it was performed again, this time to great success.
With over 40 members, the Mercyhurst Orchestra is in its largest iteration to date.
The orchestra will include two pianos and a large brass section, and Moser promises a “huge sound.”
Moser calls the music on the program “easily accessible” even for people who have never attended a classical concert before.
This concert is certain to be an afternoon of beautiful music and musicianship, and is an event that students will not want to miss.