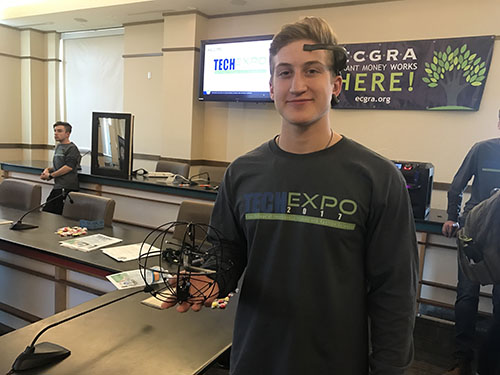 Charles Kuntz, coordinator of Information Systems for Intelligence Studies, oversaw the planning for the event.

“The goal is just to show the whole Mercyhurst community some of what we do in Intelligence Studies and some of the technology that’s out there,” Kuntz said.

The Tech Expo featured incredible gadgets, including a mind-controlled drone, a 3D virtual reality simulator, a 3D printer and an augmented reality sand table. There was also a geocaching contest, a kind of real-life treasure hunt using a GPS system, which led participants around campus looking for items.

Randy Ramos, a junior double major in Intelligence Studies and Information Technology, was responsible for configuring the software for the augmented reality sand table, a tool which uses 200 pounds of sand, an X-box Kinect and a projector to simulate three-dimensional landscapes, with practical applications in planning military strategies. He emphasized the expo’s goal of making the latest technology more accessible.

“With the augmented reality sand table we have this amazing contraption working with just a regular Xbox Kinect and a projector, so we like to show you just how accessible this technology is, even though it’s gotten so advanced,” said Ramos. “The fact that you can import satellite imagery kind of turns it from a really cool toy to an actual intelligence tool.”

Much of the technology exhibited is not generally available to the average person, often because of price, and a goal of the expo was to allow for a hands-on experience rather than merely reading about the latest in technology.

Planning for the expo begins in the first weeks of the spring semester, so the expo is the culmination of months of planning and coordination by the students and staff of the Intelligence Studies Department. Significant coordination takes place with outside vendors and donors. Additionally, funds and supplies must be gathered, technology built and a time selected. There are several hours of setup behind the expo every year.

Over 200 people came to the expo, and their feedback is invaluable for improving the expo.