Rivals are Linked by Pink 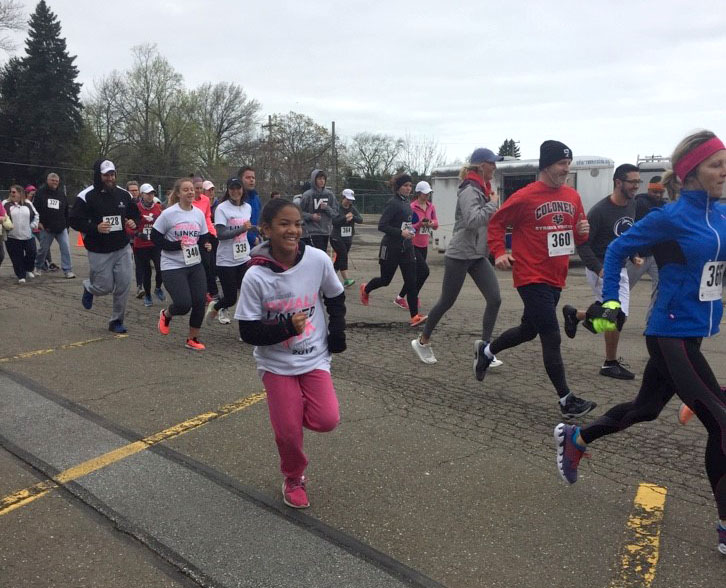 About one in eight women will develop breast cancer, the most frequently diagnosed cancer in women. On April 22, Mercyhurst hosted the Seventh Annual Rivals Linked by Pink 5K Run/Walk to benefit breast cancer.

Seven years ago, a graduate student from Gannon University’s Doctor of Physical Therapy (DPT) Program contacted Bradley Jacobson, department chair and assistant professor of Sports Medicine. Jacobson was asked if Mercyhurst would be interested in teaming up with Gannon University to put on a 5K to raise money for Linked by Pink.

Linked by Pink is a local non-profit organization, which raises funds to provide emotional and financial support for local patients and their families within a 45-mile radius of Erie, PA. Linked by Pink consists of survivors diagnosed with breast cancer before the age of 45.

“No matter who you are, you know someone who has been affected by breast cancer,” said Branden Auen, junior Sports Medicine major. “Be it helping in the smallest or biggest ways, anything that helps is worth the effort.”

Every year the location of the event alternates between Mercyhurst University and Gannon University campuses. The rivalry between the two schools inspired the name: “Rivals Linked by Pink.”

Mercyhurst Ambassadors volunteered for the event, in addition to students from Mercyhurst’s Sports Medicine Department and Gannon’s DPT Program.

“The planning initially begins in the fall, where the external resources are contacted by Gannon’s students,” said Gillott. “In the late fall the date is chosen (and) in the early spring, the location is reserved, Police and Safety is contacted and the race-day plans are officially made.”

“In years past I’ve still donated money to support the cause because I think that every little bit that goes into cancer research is incredibly valuable,” Snyder said.

The race began at 9 a.m. and concluded around 10 a.m. Following this, the winners of the race received their medals and the Chinese Auction winners were announced. Many businesses in Erie donated items for the auctions.

Along with donations from the Mercyhurst and Gannon bookstores, some of the other places include Calamaris, Greensgarden Lanes Bowling, Peen’n Peak Resort and Romolo’s Chocolates.

“It was very rewarding that we were able to make an impact in the community and to see the people who are personally affected by breast cancer work together to support the Linked by Pink foundation,” said Burns. “I really look forward to this 5K to grow in volunteers and participants and hope for the students of Gannon and Mercyhurst to continue hosting.”

Gillott emphasized the reason behind organizing the race.

“To those fighting, to those who have survived, and to those who will always be remembered- Today was for you,” said Gillott. “We are fighting and we won’t give up.”