MU softball splits with Cal, remains out of West cellar 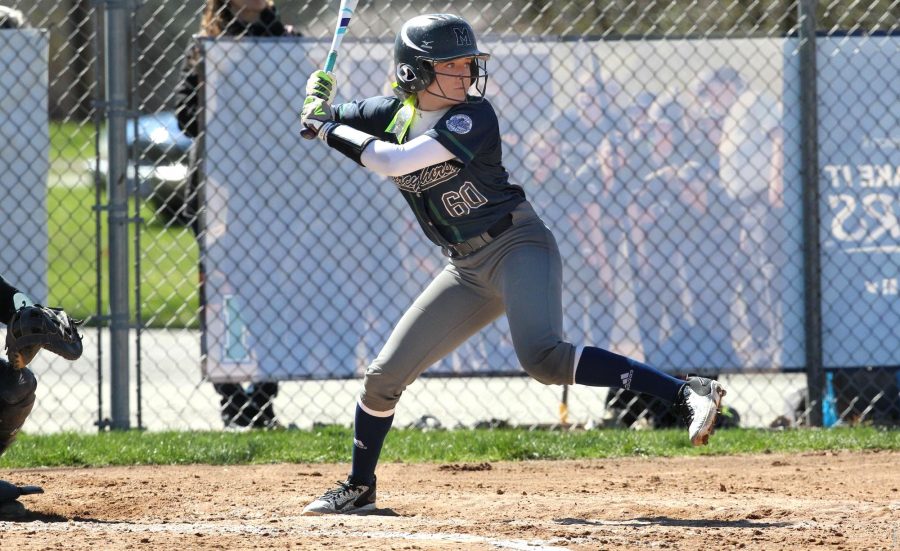 Sophomore Jamie Ward gets ready to take a swing against California University. Ward had two hits in the second game.

A tough April stretch has not boded well for Coach Leanne Baker’s softball squad. The team lost eight in a row earlier this month and lost 13 of their first 21 in April.
However, they have since turned around to win six of their last nine and consecutive games for just the third time this year, keeping them out of the cellar in the six-team PSAC West.
Now 14-27-1 and 6-10 in the conference, the Lakers sit just three games behind California for third in the West after splitting a double-header with them on April 24.
The first game saw the visiting Vulcans put up six in the third off Heather Nye en-route to a 10-0 win in just five innings.
The Vulcans got rolling early with two in the second after Jacquelyn Fowler led off the inning with a hard single to center. They advanced on a sacrifice and moved to third after Logan Blake singled, loading the bases.
A walk to Emily Price drove in the first run, and Kaylyn Roose went back up the middle to score Kaity Finley after she was hit earlier in the second. However, Nye ensuingly subdued Hailey Wilson into a 6-4 force to limit the damage and strand three Vulcans.
The third would be a different story, as Taylor Robblee led off the inning with a base hit. First baseman Meredith Grimes’ double-play ball went errant of Emily Hair in the next play.
After Fowler stole second, Finley went to right to score Robblee.
A walk to Courtney Sinclair knocked Nye out of the game as she lasted just 2-2/3 innings. Allie Smith-DiLisi inherited a loaded basepath, as Fowler had advanced to third on Finley’s second hit of the game. Adding to this, Blake sacrificed Finley over to second.
The Lakers’ second bases-loaded walk drove in Price, and Finley later scored on an illegal pitch before an errant throw from Smith-DiLisi scored Sinclair.
The second unearned run of Roose’s at-bat finally scored before she herself singled in Price and a double to right field off the bat of Wilson scored Roose to finally close the book on Nye (6-12), where four of her six allowed runs went unearned.
Two more runs in the fourth were plenty for Portia McBride (6-3), who needed just 90 minutes to twirl a four-hit shutout behind 10 runs and 14 hits of support.
Meanwhile, the Lakers returned the favor in the second game by handing the Vulcans (17-13, 8-6) just their fourth loss in their last 12 contests with an 8-1 victory.
Two quick runs in the bottom of the first got the Lakers rolling. Two singles set the stage for Jolene Teller to hit into a fielder’s choice, scoring Cassandra Egelston and Rachel DiBartolomeo. Each singled to the right to reach after the two advanced on the throw from DiBartolomeo’s single.
Designated hitter Meghan Maranto recorded the Laker’s third hit of the inning off Kaity Davis (6-5), scoring Teller and heading to second on the throw.
Price hit a homer in the third, but it wasn’t nearly enough to rattle Anna Cochis (7-11). She allowed just the homerun and seven other hits in seven innings of work, and the Laker offense had yet to score five more runs.
A walk to Julia Lang and a single from Grimes set the stage for Ellie Dougher.
She singled herself to finish off a 3-for-4 day and drive in pinch-runner Lindsey Parese to make it a 4-1 game. Dougher stole second and Egelston grounded into a fielder’s choice to score Grimes.
Emily Hair doubled in the fifth to drive in Teller, and a single from DiBartolomeo. A fielder’s choice reach by Maranto in the sixth finished off the Lakers’ fifth win in their last eight.