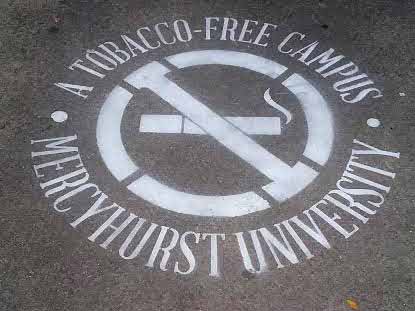 As of July 31, the Mercyhurst campus is officially tobacco free. The new initiative, first broached in Spring 2016, covers all tobacco products, including cigarettes, smokeless tobacco, dipping and vaping.

A major reason for this initiative was to decrease the effects of secondhand smoking on the school community. The U.S. Department of Health and Human Services reports that of 20 million smoking-related deaths since the 1960s, an estimated 2.5 million were caused by exposure to secondhand smoke.

It is also hoped that the initiative will give tobacco users an incentive to quit. Students and faculty can reach out for support in the form of patches, cessation packets or counseling.

However the campaign for such an initiative was a divisive issue. While most people seem to be in favor of this development, there are those who have expressed reservations about the change, citing the fact that it may stigmatize tobacco users.

Bill Welch, instructor of Intelligence Studies, while not opposed to the decision, had advocated “a few designated places on campus, perhaps out of plain sight,” for the use of tobacco products to be allowed.

Welch said he was concerned for “the addicted smokers, and the misery they would face” — in particular veterans and longtime staff. Nevertheless, he too prefers the new ban to the rule previously in place, covering only school buildings.

Laura Zirkle, vice president for student life, was involved in the Committee of Constituents on campus, and believes Mercyhurst has a responsibility to its students to introduce these rules, particularly as “96 percent of people who start using tobacco begin in their college years.”

The posters hung around campus remind students ‘“It’s not hip to dip” and that “It’s time to taper the vapor.”

Zirkle says the response so far has been very positive, particularly from parents, many of whom were “surprised we didn’t already have it.” The positive feedback has been aided by temporary signage, windows clings and chalk stenciling, which do not disrupt the beauty of campus.

Thomas Cook, Ph.D., chair of the Department of Public Health, is pleased with the campus’ move toward a healthier on-campus environment.

“With smoking remaining one of the most important contributing factors of disease, there are few measures that the campus could have taken to have a bigger impact on public health,” said Cook. “Hopefully the policy will encourage many who currently smoke to stop smoking,and prevent initiation among non-smokers.”