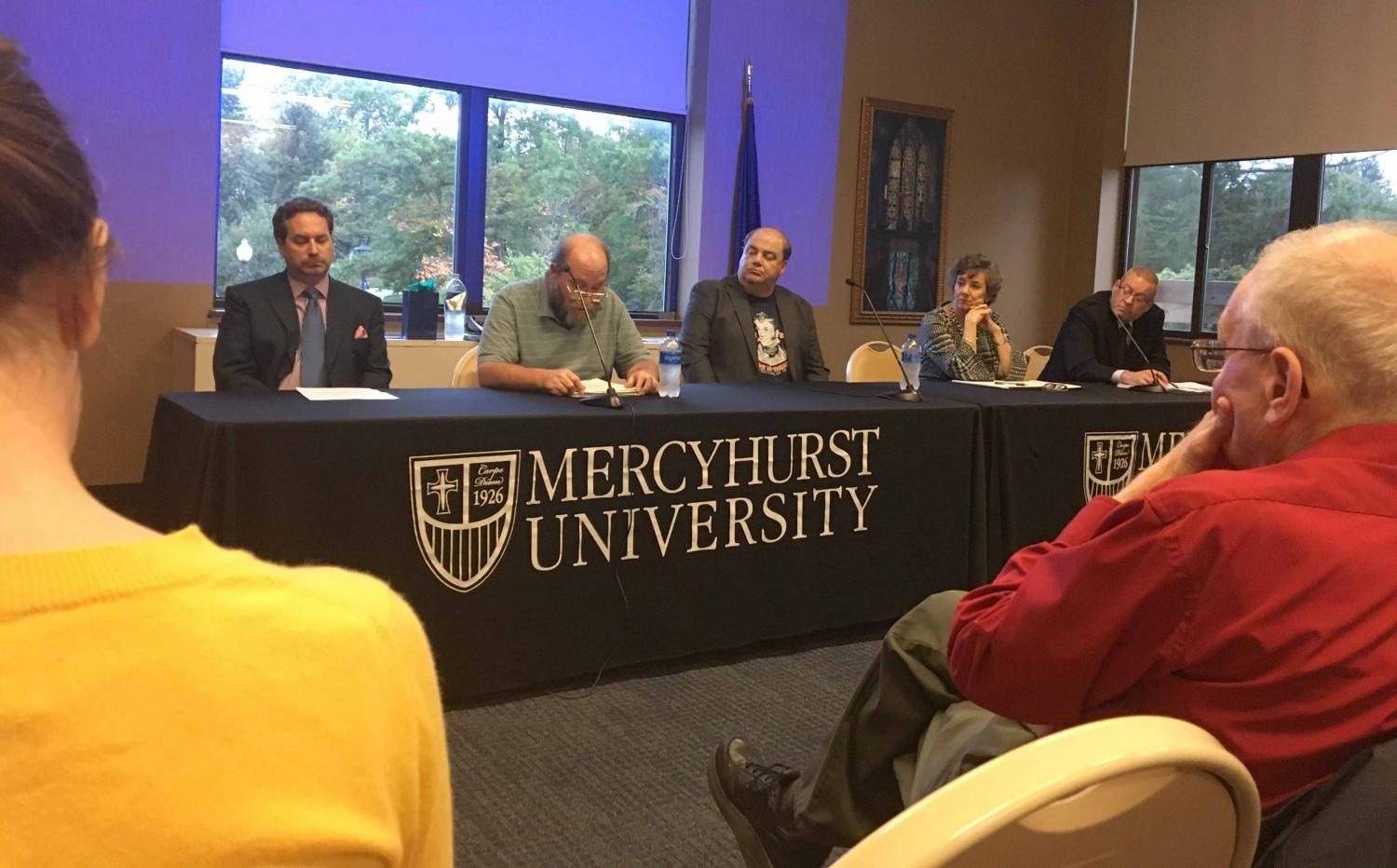 President Donald Trump started his presidency by making a large portion of the American people believe that media and news sources are against them. He was reported as saying that journalists are “the enemy of the people.”

To combat this claim, the Mercyhurst University Ethics Institute teamed up with multiple news outlets in Erie, including the Erie Times-News, WSEE/WICU and WJET/FOX 66, for “Enemies of the People? Journalism and Ethics” on Sept. 13 as an inaugural event to the 10th anniversary of the Ethics Institute.

The panelists discussed the different levels of truth and how it can change depending on the wording a reporter chooses to use.

Donahue rounded off the group of journalists with a different perspective. He chose to confront Trump’s comment that the media is the enemy of the people head-on.

He read a list of comments made by Trump that included statements like “the press doesn’t love our country” and “the press makes up stories and sources on a regular basis.”

“This bizarre combination of reality show hazing and Worldwide Wrestling Federation-style abuses is explained not merely by Donald Trump’s background and experience in such entertainment genres, but also by a pretty obvious strategy to abuse, discredit and thereby delegitimize the major sources of factual reporting in our society,” Donahue said. “This seems to constitute a preemptive campaign against the media so as to render them less able to effectively challenge and credibly fact-check the avalanche of what amount to lies and misleading statements.”

He added that a Washington Post fact checker said that Trump made 1,057 false or misleading statements in his first 214 days in office. Donahue stands by the idea that Trump’s tactics are not new, and relates them back to being similar to those used with Nazi propaganda.

As a way to tie in to Constitution Day, Sheridan spoke from the historical side of the panel, stating that the press is the only profession protected by the Constitution in the First Amendment. The press has a role to check and balance the government.

“Thomas Jefferson, who was subjected to vicious attacks and lies by the press during his presidency, supported a free press,” Sheridan said.

He quoted Jefferson, saying “the basis of our governments being the opinion of the people, the very first object should be to keep that right; and were it left to me to decide whether we should have a government without newspapers or newspapers without government, I should not hesitate a moment to prefer the latter.”

Sheridan brought up the attempted code of ethics where accuracy, accountability and independence are key. This then became a topic of discussion.

Adams referenced a recent story she covered about Deferred Action for Childhood Arrivals (DACA) and the DREAMers, saying it is hard not to get attached, while also thinking, “I hope my own stripes don’t show through.”

“Sometimes they’ll say, ‘Aha, I knew you were thinking this,’ and it’s not at all what I’m thinking. So I guess that’s a day where I go ‘Yeah!’ I did well, because I was able to keep my own opinion out of it,” Adams said.

They switched the discussion to the topic of independence by itself.

Bremner believes that independence depends on how, as a journalist, the story is approached.

“Some of the best work I’ve done is when I’m attached to the story. A young 20-year-old woman who has a knock on her door that says her 20-year-old, part-time soldier, fiance (or) husband, has been blown away,” said Bremner. “You use that, you use those aspects of your life. You’re a father, you’re a husband, you’re an American. Whatever it is, you use those angles to take that approach to a story. It is using those elements to come up with a story. You create something that hopefully has a resonance with human aspects of other people.”

Howard explained that the Erie Times-News has changed its ideals on advocacy, as the need for it as arises to deal with some of Erie’s bigger problems. They show the side that they believe the city needs to see.

Sullivan raised the question of how reporters maintain being an actual journalist in the world of Facebook Live and social media.

Bremner said that the media is no longer the single recorder of history, and journalists should change their approach in reporting because by the time they arrive at a car accident or fire, there are already videos on the internet.

At the end of the day, ethics is personal whether it is as a reporter, doctor or any profession, according to Bremner.

As Howard summarized: “Defend your credibility by being relentlessly credible.”