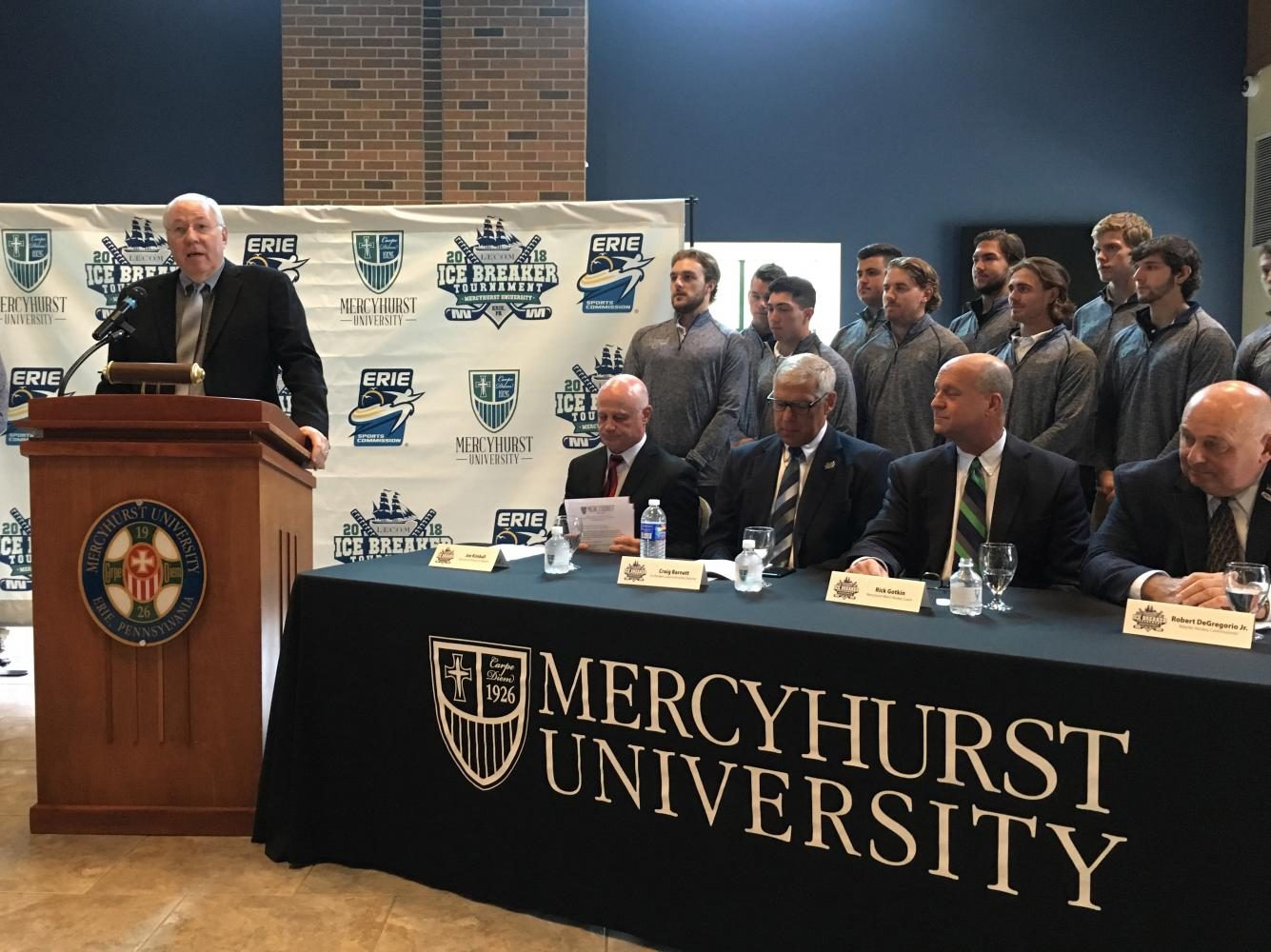 With the Mercyhurst marching band playing to welcome attendees to the Student Union Great Room on Sept. 14, President Michael T. Victor announced the exciting news of bringing the 2018 Ice Breaker Tournament to Erie.

The annual Ice Breaker Tournament is an opportunity for four select collegiate hockey teams to host non-conference games prior to their seasons.

The premier ice hockey tournament will be sponsored by LECOM and will take place Oct 12-13, 2018. The bid from Mercyhurst University and the Erie Sports Commission was chosen among many other potential bids for the kickoff event of the NCAA Division I Men’s Hockey season.

Victor was ecstatic about the partnership for the upcoming year.

“What a spectacular opportunity to demonstrate the vibrancy of our community on a national platform that will welcome scores upon scores of hockey fans to our beloved city,” Victor said.

The Mercyhurst community expects this opportunity to infuse thousands of dollars into the Erie community and bring a very large crowd of spectators, coaches, players and hockey enthusiasts from all over the country to take part in what the city has to offer. It is not only positive for the promotion of athletics, but for tourism and economic promotion of Erie as well.

Sertz is very optimistic about Erie being the host city for the coming year. He recalled first approaching Victor a few years ago with the plan to bring the Ice Breaker Tournament to Mercyhurst and being uncertain of how the plans would be brought to fruition.

“Michael (Victor) was very enthusiastic for it and understood that Erie is a great place for something like this,” Sertz said. “We have a great Division I team at Mercyhurst along with a great arena, support and program. We are thrilled to have college hockey recognized like this.”

LECOM has been a long-standing partner with Mercyhurst and has provided extensive help to its students and athletes.

“We are especially proud of our sports medicine team that provides countless hours to Mercyhurst athletics to ensure they receive the care they need,” Rubino said.

This tournament annually brings together four of the top Division I teams in the nation, with representatives from different conferences. To have Mercyhurst as the representative for the Atlantic Hockey Association for this kind of tournament is a great honor, officials said.

“Having the chance to host this terrific tournament here in Erie and show what we have as a team up against some of the best teams in the nation is again another great honor,” Gotkin said. “We are all super excited. I cannot thank everybody enough for this opportunity.”

The other teams that were selected to play with the Lakers in the tournament were University of Miami (Ohio), University of Notre Dame and Providence College.

“We pledge to do everything we can to make this a great moment in Mercyhurst and Erie history,” Victor said. “We should take enormous pride.”

Tickets for the tournament will be available starting Nov 22, with early tournament packages starting in early December. More information will be released closer to the Ice Breaker 2018 Tournament.