Man gives up waste in 'No Impact Man' 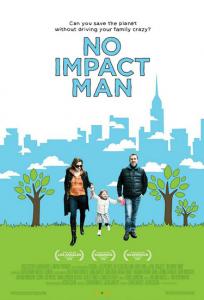 The documentary follows Colin Beavan and his Manhattan family as they plunge into an eco-experiment to leave no personal impact on the environment for one year.

An extreme example of being eco-friendly, the film is compelling, informational and stunning.

The documentary was made alongside Beavan’s new book “No Impact Man,” based on his experience with the experiment.

The No Impact project has become a national fascination and a non-profit project. The project provides information on how to get involved as well as on the movie and books at noimpactproject.org.
Though the focus of the film is how much everyday Americans waste, spend and impact the Earth, it simultaneously shows the audience the epitome of what it means to be human and what human needs truly are.

Though the project is born with Beavan who becomes the no impact man, it affects his entire family.

Trying to make a difference in the world results in differences in his less project-enthusiastic family, and the film examines these familial strains and bonds throughout their lifestyle change.
Beavan’s experiment may seem at first to be impossible in all it aims to achieve.

He and his family give up automated transportation, electricity, non-local food, toxic cleaning products, material consumption and the possibility of garbage.

Beavan did all this and was not himself an ecologist, but just a regular man tired of having only himself to blame for the current state of the environment. He made a change.

The effect of his change is statistically mind-blowing. For example, in his one year of no impact, he eliminated 4,380 gallons of garbage.

There are many other great facts and ways to cut back on individual impact without having to make as extreme of a commitment as Colin did on the No Impact Man website.

For example, one person giving up electricity and purchases for one day a week (an “eco-sabbath”) can reduce his/her environmental impact by 14.4 percent per year.

Aside from pure environmental benefits, “No Impact Man” points out the other benefits of living a green lifestyle. Many of the changes he made forced him to eat healthier, exercise more and enjoy the simplicity of life, which objectively could all make him a happier person.

As Beavan himself says, “What if we called it ‘the year I lost 20 pounds and didn’t go to the gym once.’”

Full of hilarity, heartwarming moments of humanity, and moving inspirations to be kinder to the planet, “No Impact Man” is a must-see film for all. It might save us all a little impact and generate a little happiness.