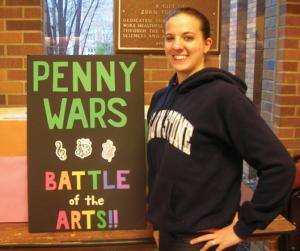 Lynn Dula photo: Senior dance major Christine Wilbur is one of the organizers of the Penny Wars.Have any spare pennies in your pocket? Why not donate them to a good cause? The music, dance and art departments will be holding a Penny War during the month of April to raise money for charity.

Senior dance major Christine Wilbur first came up with the idea early in the school year. After much planning and preparation, the idea was finally approved. Wilbur has been working with Lynn Dula of the music department and Hailey Glover of the art department to coordinate the project.

What exactly is a Penny War?. Basically, there are competing teams, each with its own jar for collecting money. For every penny in the jar, one point is received. For every nickel, dime, quarter, or dollar bill, the worth of the coin is subtracted from the positive points. After a month, the department with the most points wins.

There is a twist to this Penny War, however. No one will know which charity will receive the proceeds of the fundraiser until the end. Each department has chosen a specific charity in their own area, and the winning department will win the opportunity to donate 70 percent of the proceeds to their charity of choice.

In addition to the opportunity to donate to a charity in their area of the arts, each department will also receive, as a prize, a small portion of the proceeds they have raised as a department to do with as they see fit. These funds could go toward a department party, new equipment, or whatever else the department might need. The more involved the department, the more they will benefit.

Students interested in contributing to the Penny War are encouraged to donate. The collection jars are located in the main lobby of Zurn during the school day. Your donation will help determine which charity will receive a donation.