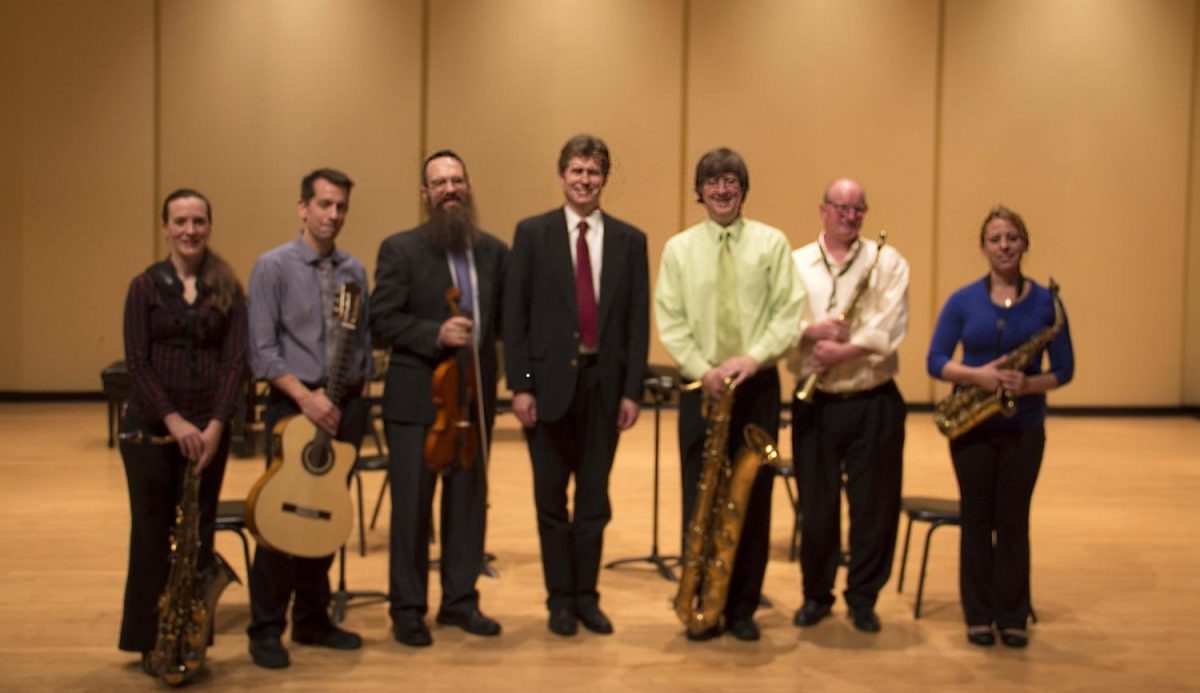 Music is an immortal bridge between cultures.
It exists as a universal language that has the power to cause a thousand hearts to beat as one (it has, in fact, been shown that music can have a direct impact on heart rate).
It transcends the space and time in which it was composed.
How else could Franz Schubert visit a small university in Erie, PA, all the way from early 19th century Austria? Or Ludwig van Beethoven from 18th century Germany?
On Sept. 20, six famous composers spanning the 18th, 19th, and 20th centuries converged on Walker Recital Hall using the talents of seven modern musicians: Nathan Hess, D.M.A.; Scott Meier, Ph.D.; Jonathan Moser; Jonathan Nolan; Rebecca Wunch; Allan Zürcher; and Bethany Dressler.
The occasion was the annual Faculty Collage Concert.
As a whole, the concert was well received.
The variety of pieces made for an evening of aural pleasure.
It made sense to start out the concert light, and no piece could have been better than Beethoven’s Sonata in F Major, Op. 24.
The piece is commonly referred to under the title “Spring,” and listening to the violin and piano duet performed by Moser and Hess, there was little mystery surrounding where the name came from.
The piece effortlessly transposed the gradual opening of sleepy blossoms to a smoothly flowing violin part and the lolling flutter of a lone butterfly to the floating rising and falling of the piano part.
It was the awakening of the concert itself.
It felt natural to follow a piece entitled “Spring” with a rhapsody. “Première Rhapsodie,” composed by Claude Debussy, was a musically colorful piece featuring Wunch on clarinet accompanied by Hess on piano.
The variation throughout the piece kept it interesting, although the naturally soft and airy sound of the clarinet caused parts of the piece to feel dull where an alternative instrument, such as the saxophone Wunch played in the final piece, may have made the duller points sharper.
Regardless, there was no questioning the talent of Wunch on either instrument, and with few opportunities for taking breaths in the rhapsody, she seemed to breathe the music itself.
The physical image of the performance was hence a wonder to behold.
Hess brought Ottorino Respighi’s “Nocturne” to life in a magnificent piano solo.
The piece was without a doubt a personal favorite.
Despite the nature of nocturnal music, ‘sleepy’ is hardly a word I could associate with the performance.
Rather, the lively nature of nighttime seemed to be highlighted in a poetically intricate fashion.
There was little idea of the day life falling asleep, but instead an image of the night awakening.
Perhaps this concert sought a theme of waking up?
The piece made me think of a mysterious but active dreamland.
I have little to say on Schubert’s Sonata in A Minor, D. 821 (also called “Arpeggione”).
The piece was performed by Moser on the viola (the big violin) and Hess on piano.
While the performance displayed the amazing talents of both faculty members, the piece itself was hardly memorable. I hate to criticize a piece solely due to my own taste, for I am certain that had I been born two centuries ago, I would not have been involved in Schubert’s fan ensemble.
An interesting addition to the Collage was the guitar performance by Nolan of Joaquin Turina’s “Rafaga.” “Rafaga” is a Spanish word that translates to “burst” in English. It fully embraced its own title by providing bursts of complex riffs as well as being itself a burst of something entirely different from all of the pieces preceding it. Perhaps the placement of the piece was meaningful in the scheme of the concert, providing an awakening moment from a traditional idea of classical music. Whether or not this was intended, the piece was welcome all the same. The rising and falling of the notes brought to mind a romantic serenade and therefore felt more purposeful (in a compositional manner of speaking) than the other pieces.
The final piece of the concert was Paquito D’Rivera’s “The New York Suite,” performed by the Presque Isle Saxophone Quartet (Zürcher, Dressler, Wunch and Meier). The piece is far more recent in comparison to all of the other selections for the concert. This alone set the piece apart from the others right off the bat – or, I suppose, right off the sax. The combination of the four main types of saxophone within a quartet was wonderful. All of the instrumentalists were comfortable with the music, although it felt that the musical piece itself was not quite comfortable with the instruments.
If the concert started with birth and grew to “Burst,” perhaps “The New York Suite” represented the bust.
I wish I could have heard a second piece played by the Quartet because the sound was fantastic.
If only the piece did not pit the sounds against one another and worked more toward a harmonious melody.
Instead, it felt like the Saxon Wars.
Each saxophone seemed to be mimicking the part that played directly before it, and it seemed more often than not, the parts overlapped to interrupt one another.
The result was a confusing composition of saxophones arguing politics over Thanksgiving dinner.
I hope that the Quartet may make a future appearance on campus to perform a less troubled (or trebled) piece.
The progression of the concert was an interesting one.
It began with awakening (which seemed to be an ever-present theme through most of the concert) and followed a walk of life until the end (even if it ended in the inevitable).
Through the combined talents of Mercyhurst faculty and guests, an aura of life itself was breathed into the concert.
If you missed the chance to experience the amazing musical talent at Mercyhurst University, I would recommend checking out the Jazz Ensemble concert on Oct. 7 at 8 p.m. in Taylor Little Theatre and the Mercyhurst Civic Orchestra concert on Oct. 29 at 4 p.m. in Walker Recital Hall.