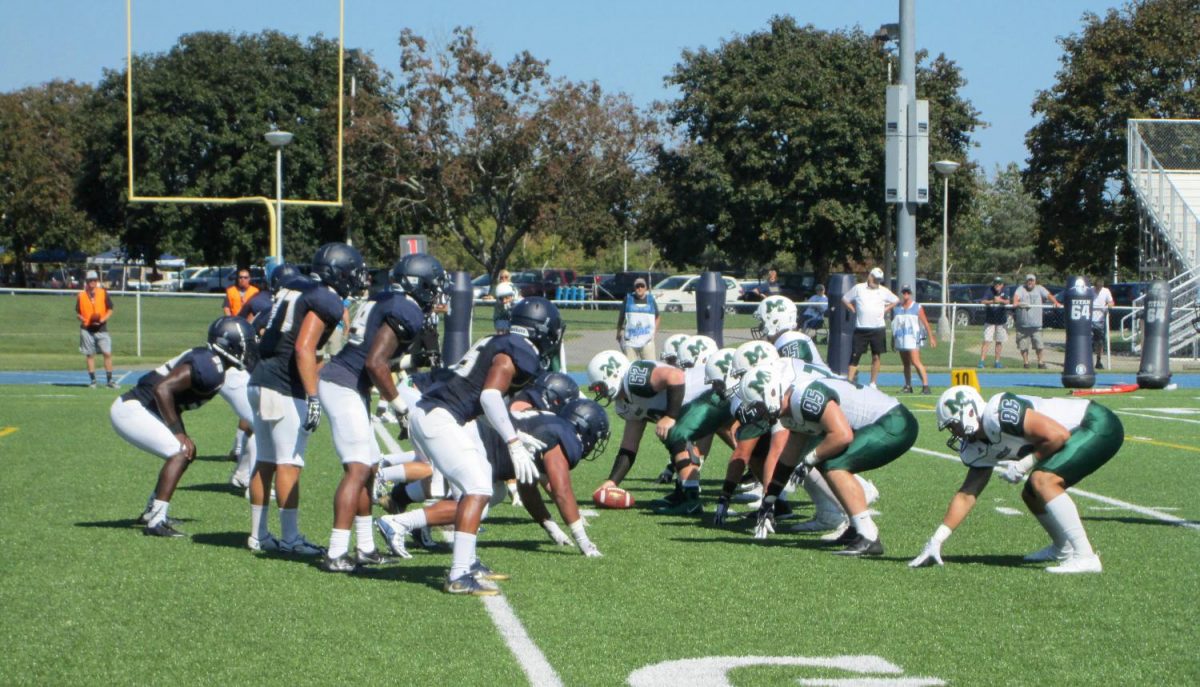 The Lakers offense gets ready to snap the ball during late second quarter. The Sept. 23 game against fellow PSAC West opponent Clarion University resulted in a 21-18 victory for the Lakers.

Following up a second half surge the previous weekend that topped East Stroudsburg University 25-20, the football squad once again took the win through a strong follow-up act.  The Sept. 23 game at Clarion University saw strong performances from the defensive unit and by redshirt sophomore quarterback Doug Altavilla.  Starting off the game, the Lakers won the coin toss and deferred to the second half.

With the completion of the field goal, both teams were tied at 7-7. The rest of the second quarter remained scoreless with several unsuccessful drives by both teams, culminating in a Golden Eagle turnover thrown to redshirt junior defensive back Emmanuel McDowell. He ran the ball 44 yards to get the Lakers within striking distance of the Golden Eagle endzone.  The game clock, however, expired on an Altavilla pass to sophomore tight-end Joe Carbone.  Carbone was close to adding to the Laker total, but the pass was ruled incomplete by the officials.

The second half began with the Lakers and Golden Eagles both taking punts after drive attempts.  However, the Lakers were able to add to their total on their second drive, once again through Altavilla’s throwing arm.  After connecting with senior wide receiver Brad Novak for 37 yards, Altavilla found Novak again to score the second touchdown of the day for the Lakers.  Three drives later, the Golden Eagles managed to add to their total with a 38-yard field goal.  The Golden Eagles were privileged with excellent field positioning, following a 25-yard pass and 15-yard penalty on the Laker defense.

Despite this, the Lakers’ defense held firm at their own 21 and stopped the Golden Eagles from screaming into the end zone again.  Entering the fourth quarter, the Lakers looked to seal the deal. An unsportsmanlike conduct penalty halted this temporarily by setting the Lakers back 15 yards.  This was nullified the next play with a 70-yard breakout run by redshirt freshman running back Garrett Owens into the Golden Eagles’ end zone.  Now up 21-10, the Lakers’ main opponent became the clock. It only took Golden Eagles quarterback Asiantii Woulard two attempts to throw his second touchdown pass for the day from the Laker 39-yard line.

The Golden Eagles would go for two the next play, and got two attempts after yet another penalty on the Lakers.  Woulard once again guided the Eagles in Laker territory, but McDowell came through again and intercepted Woulard at the Laker 5 yard line.  From here, the Lakers wound the clock down to secure their second win of the season.  Now 2-2, the Lakers end their two-week road trip with a return to Tullio Field for Homecoming. The Sept. 30 game will see the Lakers clash with crosstown rival Gannon University.